Vice President of the ABN AMRO Bank: I Cried During the Performance (Photos)

On March 18, 2008, the Divine Performing Arts (DPA) of New York held its last show of the Chinese Spectacular in Taipei's International Convention Center. The auditorium was sold out. Chen Yi-An, Vice President of the ABN AMRO Bank in Taiwan, and her cousin Chiang Yuh-Yen, President of the Kuo-Yan Development Co. Ltd., came to the show together. Ms. Chen described the show as "Touching and absolutely amazing." 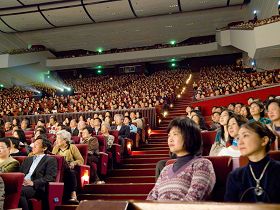 Many people came to see the last show of the Divine Performing Arts Chinese Spectacular in Taipei. 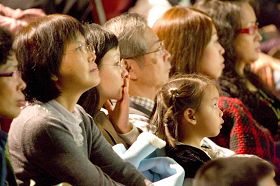 An attentive audience at the Spectacular. 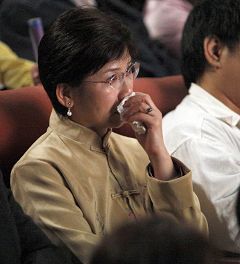 A member of the audience was brought to tears at the show.

Chen shared her impressions of the Spectacular. She said, "I enjoyed every performance. Some of them cheer you up and some move you and make you want to cry. The dances convey a very deep meaning and make you feel that you are in the actual story, among the characters, and having the same kind of emotion. I am very impressed with the piece, 'The Power of Awareness,' which touched the lofty side of human nature when the performer displayed the banner with the words, 'Truth, Compassion, Tolerance' to pursue the truth. The acting brought out the righteous emotion in people and teaches people that justice will finally conquer evil. It is very positive and educational. This show is great because it let me enjoy the beauty of Chinese culture and it contains messages that improve human nature. I didn't know much about Falun Gong before I watched the show."

Ms. Chen thought the choreographer was amazing. "The 'Loyalty of Yue Fei' brought me back to a thousand years ago and moved me with a patriotic feeling. 'Lady of the Moon' gave me the same feeling. Both of these number are great in depicting characters that will touch your heart! The costumes have brilliant colors and the artists dance very well. When they beat the drums, they, including the girls, looked very serious and masculine, however, when they dance, they became very feminine and graceful. They do what they do so well!"

Ms. Chen believes that art is a common language of mankind. She said, "Overseas Chinese formed DPA and bring out the best of Chinese culture and the most beautiful of human nature. It's a great show. I will recommend it to my friends."

Chiang Yuh-Yen, President of the Kuo-Yan Development Co., talked about the "Loyalty of Yue Fei." "It's very touching. I cried. Art can bring out people's feelings and DPA does a great job in doing that. I can see the patriotism from the artists' facial expression and the stage design. Every movement of the artists conveyed the message of truthfulness, kindness, and beauty, which comforts me."

When talking about the dance, 'The Risen Lotus Flower,' with touches on the persecution of Falun Gong, Chiang Yuh-Yen said, "I know they are a group of Chinese people being suppressed. Their spirit to pursue the truth is touching."

“President of the Examination Yuan: The Show Displays the Tang Dynasty Culture's Openness and Tolerance (Photo)”