Divine Performing Arts (DPA) gave its last show of the Chinese Spectacular in Taiwan at National Chung Cheng University on March 20, 2008. Having toured five major Taiwanese cities and given twenty-two shows for sixty thousand people, the DPA concluded its mission to spread traditional Chinese culture in Taiwan. President of the Examination Yuan, Mr. Yao Chia-Wen, sent a recognition letter to the DPA. Councilor of Chiayi County Yu Cheng-Ta issued a plaque engraved with the words "Superb Skill". People from all circles attended the reception after the last show and expressed their gratitude to the DPA for spreading art of pure compassion and beauty to the people of Yunlin, Chiayi and Tainan. 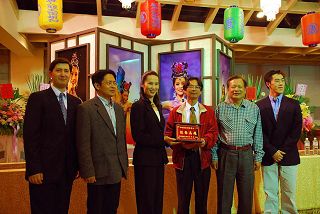 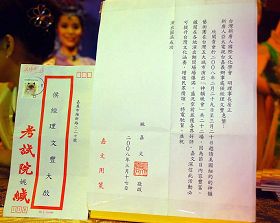 President Wu felt honored to host Divine Performing Arts at his university. He hoped to continue working with the DPA and welcomed the group back to National Chung Cheng University.

Deputy Magistrate Mr. Huang said, "The Divine Performing Arts program is very touching. It conveyed the ancient wisdom to us and helped improve the local culture. We hope the company will come back to Chiayi."

Associate Director of Divine Performing Arts, Ms. Li Weina, thanked everyone for coming to the show. She said, "We are very happy our shows in Taiwan were well received and highly recognized. It is saddening that the Chinese Communist Party on the other side of the Taiwan Straight tried to interfere with them."