Well-known architect Han Bao-de, who is also a construction, education, media, museum, arts and religious expert, saw the opening show of the Chinese Spectacular at the Taipei International Convention Center. With him the afternoon of March 15, 2008, were his wife and two children. 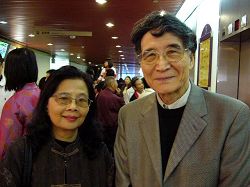 The Spectacular Is Dynamic and Creative

This is the second time that Han Bao-de has seen the Spectacular. He said that, while surface beauty is certainly important, when he watched the show, he felt that physical appearance was not of the utmost importance. He suggested that the brilliance was in the rhythm of the dance. The movements of the dancers had matured. The dancers' technique was exceptional, and every gesture and every step was dynamic in an aesthetic sense.

He said, "I think that the program is very good, and not purely from an artistic point of view. There is an element that appeals to and can be understood and enjoyed by everyone. That element has its basis in popularity. Therefore, a certain aesthetic sense that attracts people was included."

Master Han Bao-de has designed beautiful buildings and understands the fundamentals of construction. He commented on the realism of the backdrop scenes, "Backdrop design is based on creativity, because it connects the background with the stories and plots in a dynamic way. This is very creative. Also, because it is creative, it has universal appeal, increases interest in the story, and gives the audience an in-depth and clear understanding of the story."

This Is a New Direction

"The Chinese Spectacular tells each story clearly and does an exceptional job within a short time. I think this is a new direction and I hope that the average person can accept it. I think it allows everyone to become interested and thereby to become open to the lessons the show seeks to convey and to appreciate what is presented."

After the show, as Han Bao-de and his family left the Convention Center, he said, "The show was very good. There was really no one piece I preferred over another. There was nothing I liked better than something else. Everything appealed to me. I truly liked everything!"

Mr. Han Bao-de graduated from Chengda School of Construction and has a Master's degree from Harvard University. He was dean at Donghai University of Construction, worked at the National Natural Science Museum, and was Tainan Art Academy principal. He is now Curator of the Museum of World Religions and director of the Hanguang Architectural firm. Han Bao-de publishes frequently, has his own unique teaching style, and is an enthusiastic instructor of Taiwan culture. He is also an influential construction humanities teacher.

“Award Winning Actress: "I Wanted to Watch It Forever"”