(Clearwisdom.net) (reporter Wang Qinghan from Taipei, Taiwan) Professor Li Qimao is a well-known artist, a painter widely recognized for his watercolor painting. He works at the Art Department of National Taiwan University. When he saw the Chinese Spectacular performance last year, he considered it "the best performance he'd seen in the last 60 years." Understandably, he did not miss this precious opportunity to see this year's show on March 17, 2008 at the Taipei International Convention Center. He spoke highly of the performance and said, "Divine Performing Arts indeed reflects the spirit of truth, compassion, and beauty." 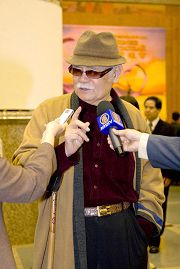 Prof. Li has participated in artistic creations and art education for many years and is a member of the Taiwan Dance Competition Adjudicator Committee. He requires a high standard for basic dancing skills. He said, "Strictly speaking, every woman performer in the Divine Performing Arts group meets international standards of dance skills. The best is that they mingle Eastern gentleness with modern three dimensional Western aesthetics. That is very difficult to achieve."

Prof. Li scrutinized every dance. He said, "Men performers showed strength and women performers manifested gentleness. Men and women performers displayed the unique combination of the rigid and the flexible. .... It is very difficult to obtain that kind of feeling. I paid special attention to the female performers. Every movement of their hands and feet demonstrated a divine charm, because dancing is the world's most beautiful action. Fifty or sixty performers dance with the music, but act as just one person, which is the most difficult. In addition, Divine Performing Arts performers made the dance, story and audience into one unit. The hearts of the audience seemed to dance with the music. That is indeed an international-level drama, not ordinary dance. It is a performance with profound meaning and reaches the realm of truth, compassion, and beauty."

In Prof. Li's point of view, the most admirable is the dance design. It is difficult to mingle Chinese cultural ethics into a dance drama. He said, "The director inserted Chinese cultural ethics and the truth of life into the dance drama. The performers convey the message to the audience by dancing and the audiences learn how to care for others and be tolerant. I deeply appreciate the Divine Performing Arts performers, director, and producer for your hard work. I truly enjoyed the most beautiful performance. Thank you."

Mr. Li Qimao is an internationally well-known painting master, born in 1925 in Guoyang County (used to be Lijiazhuang Village, Lixin County), Anhui Province. His is the director of the China Confucius Institute and the Chinese Institute of Ethics Education. San Jose State University set up a "Professor Li Qimao Arts Foundation." The city of San Francisco declared November 29 as Li Qimao Day. He is the first person to obtain an honor in the Republic of China.