On March 9, 2008, Divine Performing Arts (DPA) opened the first show of the Chinese Spectacular at the Huisun Auditorium at National Chung Hsing University in Taichung City, Taiwan, to great anticipation and eagerness from people of all walks of life. The 4,000-seat Huisun Auditorium was filled. The sell-out crowd was testimony to how people around the world are warmly welcoming the DPA.

2. Testimonies from Businessmen and Politicians

Chairman of the Chamber of Commerce: I'm giving the show a 120%

Mr. Ou Tenn-Tzong is chairman of the Taichung Chamber of Commerce, and his own business involves radio and TV program production. He saw the second show in Taichung City with the chairperson of the Employment Service Association. He said the show was "perfect" and "very successful." 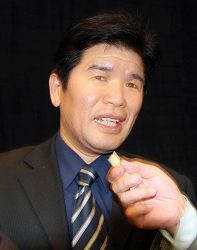 Mr. Ou Tenn-Tzong, chairman of the Taichung Chamber of Commerce

Mr. Ou said, "The show was a series of stories. Some were romantic, and some were sad and beautiful. With the incorporation of traditional Chinese music and the Chinese and English captions displayed on the backdrop, the audience was able to understand the actual content of each performance." He gave the show "a 120%."

He thought that using an artistic performance to "educate people while entertaining them" was a very good approach. He also said, "The DPA's presentation was an effort to rectify people's minds, and it also had the effect of spreading the truth; it shed the light of truth and sought to elevate society's values. That is why it was so good and so successful."

Mr. Ou used "The Risen Lotus Flower" as an example, saying that, although it showed how Falun Gong cultivators were persecuted in prison, it still sent a very positive message and gave people positive thoughts, showing that even if a cultivator was persecuted, he could still attain the Dao by upholding his firm belief.

"The Loyalty of Yue Fei" and "The Lady of the Moon" also impressed Mr. Ou deeply. He said, "The stories were well-presented. With the use of multimedia technology, the entire show was very successful." He also said that if the DPA came to Taiwan next year, the show should perform in the prestigious National Theater or the National Concert Hall, and he believed the Taiwan Chamber of Commerce would be willing to extend an invitation and organize the event.

After the show, Mr. Chiang Lien-Fu, a member of the Taichung County Legislative Committee, said, "Tonight's show was quite remarkable. It was capable of comprehensively presenting China's five thousand years of history through dance. This is the pride of the Chinese. I feel that I did not waste my time coming to the show tonight." 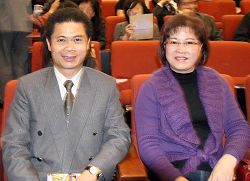 Mr. Chiang said, "In a short, two-hour period, the show manifested the essence of traditional Chinese culture. Using the form of dance makes it more accessible to the audience. The first number, 'Descent of the Celestial Kings,' was really soul-stirring, and so was the 'Drummers of the Tang Court.' These performances were really worth remembering."

Mr. Chiang, who also saw the show last year, said it was remarkable, with considerable changes made to the programs every year, and it was very creative. He thought the show was making continual progress each year.

"I think the Chinese people are really great. In only a year, the Spectacular was able to make new breakthroughs and changes. There are Chinese people all over the world, and this show makes us especially proud. It was a really magnificent show. I hope our friends and relatives try their best to make the time to see the Spectacular. It would be a pity to miss it. If you see the show, you will enjoy the memories you made."

Director of 6th Naphtha Plant: Wonderful, as if Gods Were Helping the Show

Mr. Jiang Chunxi works as an administrative director in the 6th Naphtha Plant of Formosa Plastic in Mailiao Township, Yunlin County. He brought his wife to see the show in Taichung City on the night of March 9. He was deeply impressed by the dances, particularly the male dancers' powerful movements and the female dancers' gentle and elegant steps. He kept saying, "It was wonderful, as if gods were helping the show." He said the show carried a profound meaning, which was different from the kind of shows he normally saw. "This kind of profound meaning touched my heart deeply." 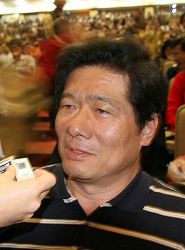 Jiang Chunxi, Administrative Director of the 6th Naphtha Plant of Formosa Plastic, and his wife

Former Director of the Department of Administrative Litigation and Discipline: No Lecturing; Carefree Feeling after the Show

Lee Xingchen, formerly the director of the Department of Administrative Litigation and Discipline, came to the first show in Taichung City with his wife, Xu Chunmei. Mr. Lee said the vocalists' songs cleansed people's minds. His wife thought the use of dance and music to convey the essence of Chinese culture was very effective.

Ms. Xu is in charge of vocational education in the Office of the Ministry of Education in central Taiwan. She said, "Currently, the Ministry of Education has listed moral education as an important project. Nowadays most people like to talk about it, and we have heard a lot about it. However, today's performance - through dance, music, and rhythmic body movements - has done a better job of interpreting the essence and special quality of traditional Chinese culture. It has done a better job of touching people's hearts.

"We are very willing to promote these kind of artistic events, particularly those that incorporate moral education. After we return home, we will actively promote this show, and I hope that many people will come see it. After seeing the show, people will feel carefree."

3. Recommendations from Experts and Scholars

Professor Lisa Xu of National Taichung University used four words to describe the show: form, spirit, strength, and movement. She said the show displayed the grandeur of Chinese culture and the integration of different ethnic groups. 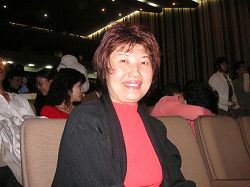 Professor Xu said, "The music and dance were completely integrated. Most importantly, the stage background was very special. It utilized multimedia technology to nicely complement the plot and dance movements. It was quite remarkable!"

She used to go to see shows in New York. She said the DPA dancers' movements used many traditional Chinese dance techniques and incorporated modern theater's techniques to create a classical dance performance. She thought the turning and spinning movements were very soft and gentle. Most importantly, the dance drama subtly conveyed the truth about Falun Gong through dance. "The vocalists' songs were very pleasing, and they were all very skillful singers."

She pointed out how remarkable it was that every performance was well-coordinated and precise. In particular, she thought that "Nymphs of the Sea" had very attractive dance movements at the very beginning. "Nymphs just appeared out of the very pristine waves." She thought "Water Sleeves" was another dance that displayed traditional Chinese dance techniques, and "Drummers of the Tang Court" utilized the drums' rhythm to demonstrate boldness and generosity with extremely unified movements.

Dean of a Graduate Institute: The Tang Drum Displays Greatness Unseen for 200 Years

Doctor Ma Yanbin is the Dean of the Graduate Institute of Public Policy at Feng Chia University. He came to see the show on the basis of strong recommendations from teachers at his university. After the show, he said, "We Chinese have several thousand years of history, but we have not demonstrated such greatness for the past two hundred years. The show allowed me to witness the reappearance of such greatness. I'm truly moved."

Doctor Ma said that his favorite was "Drummers of the Tang Court," which moved him deeply. He said, "The whole presentation, not just the dance and the sound, really displayed the flourishing era of the great Tang Dynasty." 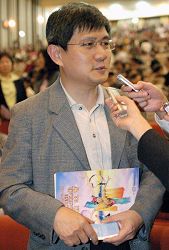 "The flourishing era of ancient China was demonstrated with such spirit and greatness. I thought that, perhaps because China has been invaded by big foreign powers and international issues, the Chinese nation and its several thousand years of history had already lost this kind of greatness for quite a while. I was really moved. Although it was a short piece of drumming, I could feel the greatness from the performance; this was what impressed me the most."

Doctor Ma also shared another joy he got from watching the show. He said, "Some people think that, due to international travel and communication, all the cultures around the world are becoming more similar, but that is not true. Through this performance, we have seen the uniqueness of different cultures. I was telling my students about this problem just this morning. I did not expect to see an actual performance like this. I have a specific example now, and that makes me very happy."

In terms of artistry, he thought the show presented something that could only be found in books or legends in the past. For example, "Water Sleeves" presented a feminine and gentle style of dance and the Tang drums were very masculine. They all were properly presented on stage. He said that he rarely had seen a show that was capable of demonstrating so many cultural elements so properly. The show touched his heart and cheered him up.

Executive Director of Transworld Institute of Technology: Following the Principle of "Truthfulness, Compassion, and Tolerance" Brings Harmony to Society

Ms. Xu Shuming, the executive director of Transworld Institute of Technology in Yunlin County, came to the show with a friend. She said, "I'm proud to be Chinese. Not only was the show a feast for the eyes, but it was also a cleansing ritual for the soul."

She also mentioned that, in addition to Chinese culture and historical culture, the show also displayed the Buddha School's profound and broad meaning through beautiful body language, without lecturing people. Yet, the audience was still able to feel the greatness in their hearts.

Ms. Xu said all the dance performances expressed the Buddha School's profound concepts and peace. She was very impressed with "The Power of Awareness." She said if everyone could follow the principle of "Truthfulness, Compassion, and Tolerance" by being more tolerant, truthful, and compassionate, society would be much more harmonious.

Dean of Chinese Medicine Clinic: Divine Performing Arts in Reality and in Name

Mr. Hong Fengtian is the honorary dean of the Changgeng Chinese Medicine Clinic in Caotun Township, Nantou County, and was Chairman of the Caotun Rotary Club from 1998 to 1999. He brought about a dozen family members and relatives with him to the opening show in Taichung. He also recommended the show to many people. 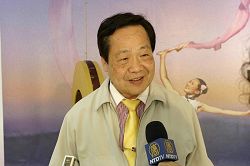 Mr. Hong said, "The DPA is really excellent, world-class. It is Divine Performing Arts in reality and in name. After seeing the show, I felt relaxed and happy. It really put me in a positive mood. Every movement was so well-coordinated. I will recommend the show to my fellow members in the Rotary Club."

Mr. Hong said during the intermission, "The dancers' skill was outstanding, excellent, and magical. They were just incredibly good."

As for the backdrops, he said, "Wow, I have rarely seen this kind of backdrop. It gave me a realistic experience, as if I were truly in a magical place... I truly appreciate the opportunity to see this show."