Dance Teacher: It has been a long time since I have seen such beautiful, amazing dances (Photos)

(Clearwisdom.net) The final performance of the Divine Performing Arts Chinese Spectacular in Kaohsiung, Taiwan on March 8 worked up to a climax. The staff said that many people came to see the Spectacular due to the show's excellent reputation, and all tickets had been sold out. The sponsor had to add some seats so that more people could enjoy the artistic feast.

Dance Teacher: It has been a long time since I have seen such beautiful, amazing dances

Dance teacher Xu Peijun learned from a bulletin board that Divine Performing Arts would perform in Taiwan. Because she missed the performance in Tainan, she made a special effort to come to Kaohsiung to see the final show on March 8. After the show, she said emotionally that she was moved, and said, "It has been such a long time since I have seen such beautiful, amazing dances. I suddenly became speechless." 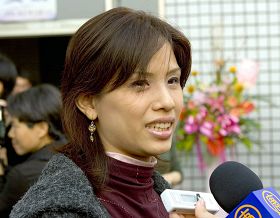 As a dance teacher, Xu Peijun said that the most impressive number for her was "Descent of the Celestial Kings."

She continued, "The entire process, the choreography, stage design, costume design and high-tech backdrops are marvelous. I enjoyed the show greatly." 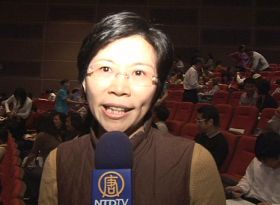 Zhao Suxing, a life insurance manager: The lyrics in "Only Truth Can Save" and "Rest in Knowing" need to be understood with your soul

Ms. Zhao said, "The first performance, 'Descent of the Celestial Kings,' amazed me. My soul and body ascended during the performance. And specifically, the lyrics in Only Truth Can Save,' and, 'Rest in Knowing,' need to be understood by your soul. In the modern, wealthy society, we often feel that our hearts are empty. In this show, we should find what we need."

Zhao Suxing added, "I am very pleased to have a chance to enjoy the show with my parents and my grandmother. I will tell more friends to come see the show. They will have a great experience."

Supervisor in the Electronics Field: The performance moved me very much

An assistant manager from Nanzi Electronics came to see the show on her friend's recommendation. After the first half of the show, she said, "I am deeply touched. Some of the performances are so moving. In the piece 'The Risen Lotus Flower,' I couldn't stop my tears. When I saw the lady in jail, I could not help but burst into tears. The scene switches during the performance: one on earth, the other in heaven. When I saw it, I was so moved." 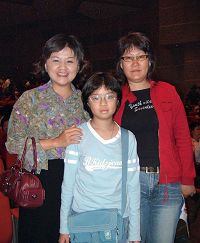 Cheng Yingzhu (left), an assistant manager from Nanzi Electronics, along with Wang Ruiwen (right), an employee in the production design business, watched the show together. Ms. Cheng said, "The show is marvelous. I couldn't stop my tears."

Cheng Yingzhu liked "Drummers of the Tang Court." "Those dancers, when they play the drums, they are so masculine. Yet, you can tell that they have other aspects of tenderness. The vigor they show is really wonderful."

Her friend, Wang Ruiwen said to the reporter, "The baritone and soprano sang very well. The lyrics were very touching. The artistic conception revealed by the singing was very moving and profound. We all don't know why we come to this world! And as for the dancing, they dance so lightly, as if they are in heaven. I found myself also wanting to get up onstage to dance. Their fingers are very fine and their feet move so gently, as if they are gliding."

“Falun Dafa Has Melted the Ice in My Heart”