(Clearwisdom.net) On March 8, 2008, the Divine Performing Arts New York Company successfully concluded its performances of the Chinese Spectacular in Kaohsiung, and traveled to the cultural city of Taichung, where there will be five shows given at the National Chung Hsing University. The first two shows were presented to a full house, and many people from the field of education were in attendance. 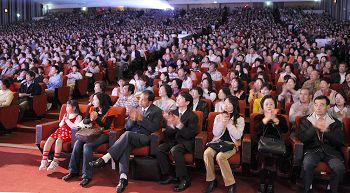 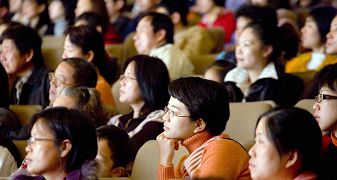 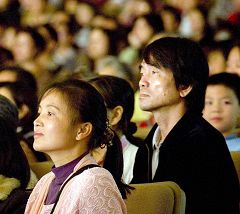 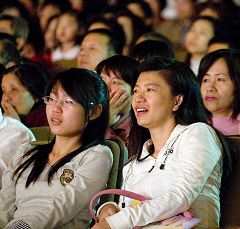 Former President of National Chung Hsing University: "Divine Performing Arts leads us into a pure land in the human world."

Former President of National Chung Hsing University, and President of Chung Chou College, Professor Peng Chuo-kui and his wife attended the evening Chinese Spectacular on March 8, 2008. They noted with praise that the Divine Performing Arts Chinese Spectacular carries forward Chinese traditions, has a high artistic level, a precise arrangement and design, and contains profound meaning. It is even more meaningful that the show was performed by overseas Chinese. 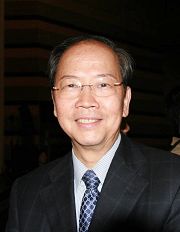 "The opening piece, 'Descent of the Celestial Kings' transported us into the Buddha's Paradise, and we entered a pure land in the human world. And then we came to the end of the first half of the show with the dance piece, 'Drummers of the Tang Court.' From the stately paradise to the majestic human world, the design was quite thoughtful and really admirable," Professor. Peng was deeply impressed by the diversity of the performance, featuring folk dances from the Han, Mongolia, Manchu and Tibetan ethnicities. He also praised the dancers' professional skills.

Mr. Peng pointed out that the performances that reflected belief and spirit were particularly touching. "When cultivators are subjected to political interference and persecution, if they do not have faith, do not make sacrifices for upholding justice, generally speaking, they would find it hard to endure and tolerate such tribulations. When the three words, 'Truthfulness-Compassion-Forbearance' that the cultivators persist in appeared on the rear screen, they struck the right chord with the audience, who responded with enthusiastic applause. I think this is a manifestation of the show's success. It is greatly inspiring for humanity to pursue freedom of belief."

The President of a Veterinary College, Professor Shie Kui-le, said that the Divine Performing Arts Chinese Spectacular combines elegant Chinese classical dances with modern high technology, and perfectly presents well-known historical stories and legends in China. It is beyond his imagination, very moving and impressive. The show has a huge lineup, the costumes are well-tailored and gorgeous, very appealing. The story of Hou Yi shooting down the nine suns ("Ladies of the Moon") was expressive and lively. "Loyalty of Yue Fei" was soul-touching, and the last piece of the first half of the show "Drummers of the Tang Court," was very powerful and inspirational, making one feel energetic. Looking at the show from an educational perspective, Prof. Shie said the Divine Performing Arts conveyed precious traditional culture and core values in Chinese culture that have been lost in the modern chaotic world, such as the sense of justice. Prof. Shie's wife added, "I found what I had read in history books was all presented thoroughly within such a short period of time. The ancient stories and legends have been an impression and an imagination in my mind, but today, they were vividly presented in front of my eyes. The celestial maidens' dancing in the first performance 'Descent of the Celestial Kings,' was absolutely magical. The most beautiful part was their hand movements, so rich, exquisite and gentle. Their dance steps were so light, like floating in the air, full of divine spirit."

President of Science Academy: "The dances are light and serene, releasing people from the heaviness of the mundane world."

Fei Tian Academy of the Arts Invites Applications for Orchestra
”