Congress of the United States
House of Representatives

I am please to recognize New Tang Dynasty Television and Divine Performing Arts for bringing another wonderful series of "Chinese New Year Splendor" to Radio City Music Hall. Your talented classical dancers, vocalists and musicians help to commemorate this holiday, which is celebrated by more than 1.5 billion people around the world.

The first production of this festive show was unveiled in New York City just five years ago. Today, your Chinese New Year's performances are enjoyed by sell-out crowds in New York and across the United States.

Cultural events such as yours are truly reflective of the diversity of our city. This event provides an opportunity for people of all backgrounds to learn about China's rich traditions of dance and performance. With more than 5,000 years of history, Chinese culture has so much to teach all of us.

Congratulations on this special annual event, and best wishes for your continued success! 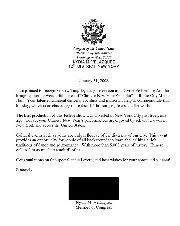