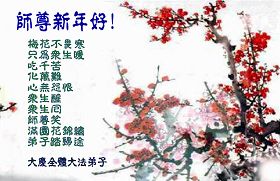 We will definitely study the Fa well, cultivate ourselves well and do well the three things. We will follow Master to return home.

It snowed heavily for nearly two weeks, and there is a possible outage at any time, so we send our Chinese New Year greetings to esteemed Master in advance.

Respectfully a Dafa disciple in his 80s in Beijing
January 25, 2008

Falun Dafa Practitioners from the following Areas Respectfully Wish Esteemed Master a Happy Chinese New Year. They expressed their determination to do the three things well, to offer salvation to more sentient beings, live up to Master's compassionate and arduous salvation and fulfill their prehistoric vows.