(Clearwisdom.net) The Divine Performing Arts on Tour, a New York-based company that revives traditional Chinese culture through mythology-inspired classical dances, ethnic folk dances, opera-style songs, and Western and Eastern music, ended its run of four shows at the Royal Festival Hall in London on the evening of February 24 amidst thunderous and prolonged applause. Londoners, known for their conservative natures and sophisticated tastes in art and music, were excited and enthusiastic throughout the show. The tickets sold out before the opening show, and audience members were reluctant to leave after each performance. About 10,000 people attended the Chinese Spectacular over four days.

Royal Festival Hall (RFH) is a world-famous concert hall and arts venue and the permanent legacy of the post-war Festival of Britain held on the South Bank in 1951, appropriately nicknamed "the People's Palace." The RFH is part of the Southbank Centre, which includes The Hayward, Queen Elizabeth Hal,l and Purcell Room. The South Bank Centre management said that they plan to welcome a large increase in the nunber of performances for the Divine Performing Arts show next year.

According to the staff, due to overwhelming demand, the concert hall agreed to print and sell tickets for seats that were previously not offered due to obstructed views, in order to accommodate audiences of nearly 3,000 at each performance. Long lines formed outside the ticket window before the last show, and many people asked for their names to be added to a waiting list, hoping to buy any returned tickets.

All four performances in three days drew full houses, and the Chinese Spectacular created wonderful memories for about 10,000 people, a rare phenomenon even for a famous venue like the Royal Festival Hall.

The final performance of the Chinese Spectacular at Royal Festival Hall 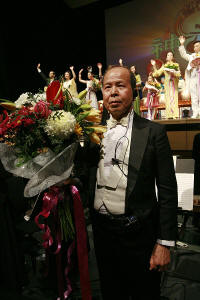 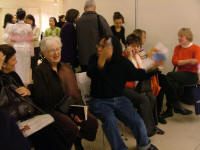 People waiting to buy tickets for the Chinese Spectacular 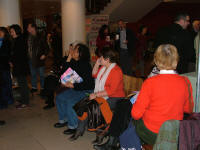 The most often heard comments about the Spectacular were, "Excellent! Outstanding! Supremely gorgeous! Marvelous enjoyment! I am very happy and I truly appreciate it!" Many people admired the exquisite choreography, stunning costumes, ingenious backdrop, and the vivid facial expressions and body language of the dancers. Many people said they had never seen such a wonderful, world-class performance.

Almost everyone said they loved the drums, as in the numbers, "Drummers of the Tang Court" and "Victory Drums," and they described a feeling of inner peace and comfort after watching the show. According to some, this feeling is similar to what one might experience after meditation or physical therapy. Traditional Chinese culture emphasizes "Oneness between heaven and man," and the performers' superior skills embody this ancient belief, thereby emitting tremendous energy that cleanses and reinvigorates the viewers. The Tang Dynasty is commonly seen as a period of progress and stability in China, when literature, art and poetry flourished, and Buddhism, Daoism and Christianity co-existed in harmony. 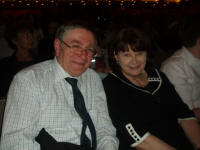 Mr. John Russell is a retired analyst and his wife, Elaine Russell, is a teacher. They both had high praise for the final Spectacular performance. "It was extremely brilliant. We enjoyed it very much. We are thrilled to have come today. The dance, the costumes, the music, and the orchestra were splendid, and the drummers' dance has awakened every one of us."

Passion for Chinese culture is not new for the English. The exhibit, The First Emperor: China's Terracotta Army, at the British Museum drew more than 100,000 attendees in its first six months. Nearly every British family has some kind of china or Chinese painting as a family heirloom. Ever since the days of Marco Polo, who gained fame for his daring adventures, the Chinese people's deep-rooted cultural background has always been an object of curiosity and exploration. 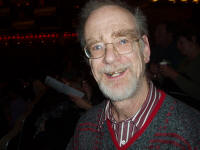 Ron also commented on the profound inner meaning of the Chinese Spectacular. "I am very pleased that I had the good fortune to see the performance. I will have to ponder it after I get home. I don't know very much about Chinese culture, but several days ago I went to visit the exhibit The First Emperor: China's Terracotta Army, and I studied Chinese culture for a week. Today's performance further expanded my views."

Many people who saw the Spectacular echoed similar sentiments of attraction for Chinese culture, which is reflected by the popularity of tai chi, acupuncture and Chinese medicine. As Mr. Finn, an instructor at the Royal Academy of Dance, said, "I have a Chinese heart." For those who believe that nothing happens by chance, they might suspect that a deeper connection brought people to the Spectacular.

Some people say that the overwhelming popularity of the Divine Performing Arts in England signals the beginning of a new trend that will lead to the renaissance of classical arts.

Packed house at the Spectacular performance

While relishing the inspirational beauty of the Chinese Spectacular, people were surprised to learn that the Chinese government has blocked access to view the performance online, and Chinese consulates have been harassing show sponsors abroad. Peter Clark, a former producer for the BBC, has made many visits to China. He said that he loved seeing the performance and that it conveyed traditional Chinese cultural values in a way that was different from the Communist Party. "This show emphasized "Truth-Compassion-Tolerance." He hopes there will be a Falun Gong protest at the Beijing Olympics, and said that even people who don't practice Falun Gong should all join the protest. Mr. Clark feels that it's very important to let the whole world know about the Communist Party's persecution of religious belief. He thought that people should not fear the Party and should step up and say "No!" to the persecution. 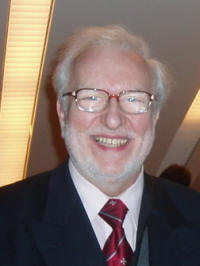 Mr. Clark also expressed the understanding that a nation's traditional culture does not belong to a certain political party. "The Communist Party's interference with the Divine Performing Arts is really ludicrous. The performances will certainly attract more people," he said.

“The General Manager of a Corporation Has Righteous Thoughts”