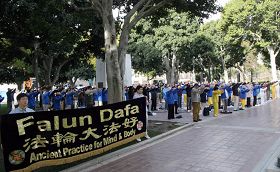 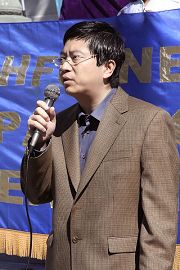 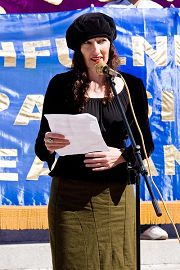 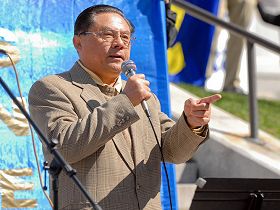 Activist Fan Wu said that the recent winter disaster in China was a sign from Heaven that the CCP would soon be destroyed. 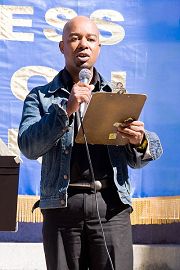 "The persecution of Falun Gong is the largest human rights disaster in China," Professor Wu said.

On behalf of Wang Zhiwen's daughter Wang Xiaodan, Marcus Green, a member of the Rescue Zhiwen Wang Group, introduced the case of Falun Gong practitioner Wang Zhiwen. Mr. Wang was arrested early on the morning of July 20, 1999 because he was a coordinator for the Beijing Falun Dafa Association. In the past eight years, his daughter Wang Xiaodan has only received two letters from her beloved father and has heard only heart-breaking news from her relatives.

Wang Xiaodan, Marcus Green and their supporters are collecting signatures in order to rescue Wang Zhiwen. Their goal is to collect 10,000 signatures before Father's Day.

The persecution has affected many innocent families. One example is Los Angeles practitioner Liu Yaning whose mother Li Shuying is still in custody in China for her belief in Falun Gong.

At the rally, Ms. Liu shared her mother's story. A retired teacher, Li Shuying was recognized for Excellence in Teaching by the Beijing city government. At the development in which Li lives, there were nearly 100 practitioners participating in morning practice every morning before the persecution started in 1999. However, many of them have been illegally arrested, sent to labor camps or just disappeared in the past eight years because of the persecution. Ms. Li herself is still being detained in Daxing Women's Labor Camp.

As time goes by, more evidence of persecution has been exposed and people are awakening to the evil nature of the CCP. Consequently, more and more Chinese people have bravely denounced the CCP openly, and have chosen to quit the party and its affiliated organizations.

At the rally, Dr. Gao Weida, director of the Global Service Center for Quitting the CCP, said that more and more people have lost hope in the CCP. "During the recent snow disaster, government agencies at all levels were either helpless or non-functioning and people had to organize themselves to rescue others. From this case, people realize that the CCP is corrupt and incapable of doing anything good for the public. On the other hand, they realize that they can live a normal life without the CCP."

After the rally, participants marched from City Hall to Chinatown. A Falun Gong experience sharing conference was held on February 24, 2008.