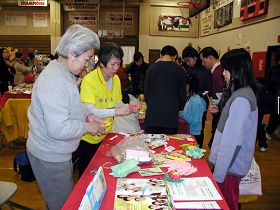 Some Westerners had not heard of Falun Gong before. The practitioners explained what Falun Gong is, how it has spread all over the world, and about the brutal persecution occurring in China. When those listening learned that Human Rights Torch Relay would come to Boston, they said they would participate in the event.

One Western man said he saw the Chinese New Year Spectacular in Boston last year and thought it was wonderful. He downloaded the Nine Commentaries on the Communist Party and read it. He would like to know more about Falun Gong and wanted to learn it.

“Who Are the Real Criminals?”