At noon on February 23, hundreds of Falun Gong practitioners from different countries held a parade in Los Angeles to urge the world to take action to end the brutal persecution of Falun Gong in Communist China and encourage people to quit the Chinese Communist Party (CCP). 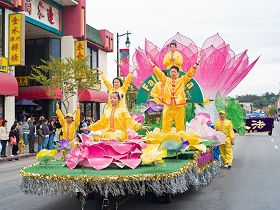 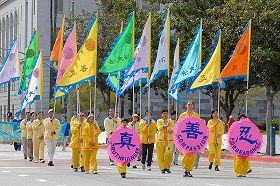 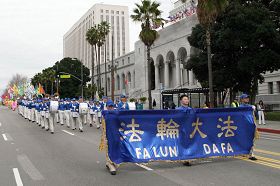 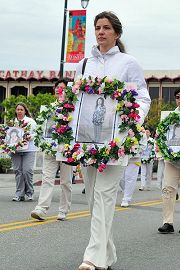 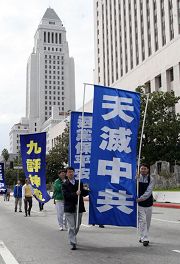 The parade consisted of the Divine Land Marching Band, a Waist Drum team, a decorated float, and celestial maidens. Starting at City Hall, the parade marched through Chinatown attracting many passersby. Among the many banners and flags displayed by the practitioners, there were giant banners which read "The World Needs Truthfulness-Compassion-Tolerance", and "Stop the Persecution of Falun Gong". There was also a somber group of women practitioners wearing white dresses. Holding photos of Chinese practitioners who lost their lives in the persecution, their procession touched many spectators. Many of them took videos or pictures of the parade. 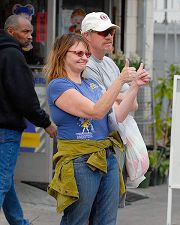 Robin and Jeff Bradley came from Orange County and ran into the parade procession in Chinatown. Robin was very happy to see the parade. Repeatedly, she raised her thumbs or applauded to express her support for the practitioners. "I hope they will soon be able to parade in China," she said.

“Epoch Times: One Member of Parliament's Crusade to Quell a Gruesome Trade”