Japan was heavily influenced by the culture of the Tang Dynasty. During the Tang Dynasty, the first group of Japanese envoys was dispatched to China in 630 A.D. Japan sent over ten such groups to China during the following 200 years. These envoys brought back to Japan Chinese poems, dances, calligraphy, laws, construction styles, and so on. They especially brought Mahayana Buddhism to Japan. Even up to the present time, traces of the influence of the culture of the great Tang Dynasty on the Japanese culture can still be readily seen.

Although the Divine Performing Arts of New York created quite a sensation during its tour in North America, it is even more admired by audiences in Japan, a country rich in Asian culture. On the evening of February 12, the second presentation of the Chinese Spectacular portrayed dazzling Chinese culture to Japanese theatergoers in the Kousei Nenkin Kaikan Big Hall in Tokyo. Audience members were generous with their applause to express their appreciation and excitement. 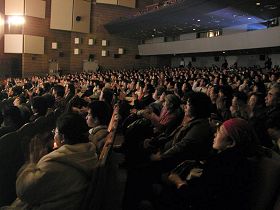 Japanese Senator Toshiko Hamayotsu was born in Taiwan. She is very fond of the words of Mr. Sun Yat-sen, the founder of the Republic of China: "The mind is the source of everything." She wished the Divine Performing Arts the best on its tour around the world, including in Japan. She hoped that this would be a year in which the historic traditional Chinese culture could be spread widely throughout the world. She also wished the performance success. 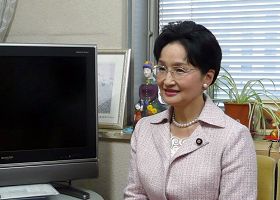 Mr. Murata Mitsuhe, a professor at Tokai Gakuen University, saw the first Divine Performing Arts performance in Japan. He has been a Japanese ambassador to several countries and often appears at international conferences. He has been the Ambassador to Switzerland, to France, and to Senegal. He was also the foreign minister in the Japanese Senate. 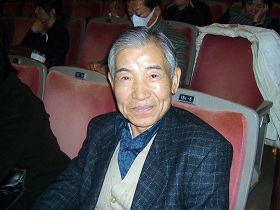 Mr. Murata Mitsuhe, an ambassador to several countries, commended the Chinese Spectacular performers for their superb skills and the excellent rhythms of the Tang Dynasty drums

During the intermission, Mr. Mitsuhe agreed to an interview. He said that the skills exhibited during the performance were " extraordinary," and he thought that the performers must have endured "very disciplined training." He said that the dances were very beautiful, the singing was also excellent, the drumming skills of the Tang Dynasty drummers were "really extraordinary," and the rhythm of the drumming was very authentic.

Additionally, Mr. Mitsuhe indicated that the persecution of Falun Gong practitioners in China, which was portrayed in one of the programs, would not last much longer.

Television producer: I hope the Divine Performing Arts will appear on our programs 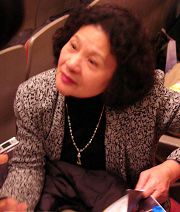 At a friend's suggestion, Ms. Keiko Asai, a television producer with BS Japan television, came to this year's the first Chinese Spectacular performance in Tokyo. After the show was over, she said, "I think that this year's performance is much better than last year's. If I have the opportunity, I will certainly invite them to appear on our television programs."

She also indicated that she has had a very strong interest in Chinese culture and was really pleased to have this chance to better understand it.

As a television producer, she also owns a school for training actors, which has a total of 6500 students.

Editor-in-chief: "It would be nice if I can someday see it in Beijing"

After watching the first half of the performance, Mr. Su Ling, Xinhua Times editor-in-chief, said repeatedly, "I think it is very good. I am touched. Several of the programs moved me very much. I am a person not easily affected by such things and I do not cry easily. However, a moment ago, I had tears running down my face."

He gave an example. "In 'The Loyalty of Yue Fei,' when Yue Fei's mother tattooed the words on his back, it conveyed such a patriotic spirit. It was also something that is above ideology. We are all Chinese. No matter where we go, we are still Chinese. Chinese people are forever Chinese. Chinese people love China and work hard for their nation, for the liberation of our nation, and for the freedom and happiness of our nation. This spirit is forever motivating. What I said about being moved to tears a moment ago carries this meaning."

He said that, before he saw the show, some people considered it to be controversial and very sensitive. He indicated that the more sensitive it was purported to be, the more he wanted to see it for himself. After seeing the performance, he thought that it was very good and that its artistic power was, in fact, very acute. "Whether it is the arts or "Truth-Compassion-Tolerance," they are all universal values. So there's no need for people to project ideology, prejudice, or even hatred onto these performances."

He said that the pursuit of freedom is a human right, and that includes artistic pursuit. In fact, behind the arts is the truth. He indicated that today's trip to the theater was really worthwhile. "In terms of artistic level, this performance was extremely good. It is professional, world-class. It has even played on Broadway, not to mention Tokyo. I have always thought that, even though we can now sit in Tokyo and see the show, it would be nice if we could sit in Beijing and see it."

Tokyo became the capital city of Japan in 1869. It is the largest city in Japan, the center of Japanese politics, economy, and culture, the hub of air, sea, and land transportation, and a city famous for sightseeing.

“Duisburg, Germany Audience: We Will Definitely Recommend the Show to Friends”