(Clearwisdom.net) On February 15, the third show of the Divine Performing Arts Chinese Spectacular was presented in Tokyo at the Bunkyo Civic Hall and received tremendous praise from the audience. Bunkyo Ku, most known for its excellence in higher education, is located in the heart of Tokyo and is the home of fifteen renowned institutions of higher education, including Tokyo University. The Bunkyo Civic Hall is one of the most prestigious concert centers in Japan. 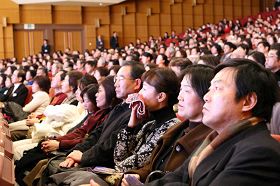 The audience fills the hall at Bunkyo Civic Center

Alfredo Martiz, the ambassador of the Republic of Panama, saw the show with his wife. During the intermission, the ambassador said that he was very impressed and the performers did "perfectly." 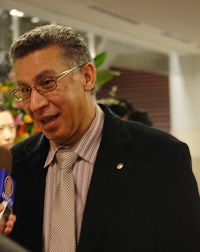 Ambassador of the Republic of Panama, Alfredo Martiz.

"Really good symmetry, very good coordination, and symbolism. For me, the most impressive aspect of the show is the symbolism of each performance. How you represent life, and creation, and all those things, for me, it's not only beautiful because the performance itself, it's beautiful because of the symbolism that it represents - the spirituality. I cannot understand Chinese but I caught the idea of spirituality. I'm really pleased," said the ambassador, adding that "The Lady of the Moon" and "The Risen Lotus Flower" were his favorites.

Ambassador Martiz left the show with a sense of inner peace, "The message I received was peace. I think it's a message we can all understand."

Fumiaki Matsumoto, a member of the Japanese House of Representative, sent a congratulatory letter of greeting to the show. He wrote: "What is true wealth? It is not just economic wealth. It is to carry on excellent traditional culture so that every citizen is proud of such spiritual wealth. I believe that every overseas Chinese has realized the importance of this. For this reason, this grand show was made possible and is growing."

Mr. Hashimoto Naokatsu, speaker for the Bunkyo District Council, said that the show was extraordinarily exquisite. "Ever number was so beautiful and the detail and the colors were so dazzling," he said. The speaker was amazed by the Tang Court Drummers and the legends presented by the show. 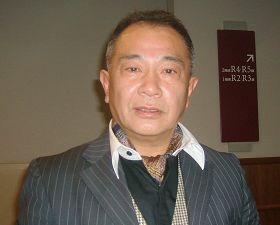 Professor Norimichi Kojima, dean of the Graduate School of Arts and Science at Tokyo University, said that the show was a presentation of the history of China and Chinese culture.

"I can understand why people always admire the Tang Dynasty. That was the most prosperous time of Chinese culture and Japan also sent diplomats and students to the Tang Court at that time," said the professor. "I was most impressed by the soprano in the first half of the show; her voice was outstanding."

Artist Kameyama once taught Japanese culture at Tianjin University. At the end of the Spectacular, she said that the show was great. She was most impressed by the soprano, as well as the tenor. "They were so outstanding! Even if the show only had these two numbers, the whole evening would have been rewarding."

After the Tokyo performances, Divine Performing Arts will then travel to Nagoya and Osaka.