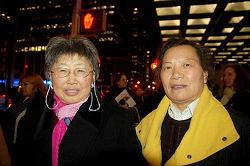 Mrs. Pan had seen the Christmas Holiday Wonders show by Divine Performing Arts earlier in the winter. She said, in comparison with Holiday Wonders, the New Year Splendor is even more splendid. She said the stage and background design of the Splendor were as good as any first-rate Broadway show. She liked the last number, "Victory Drums" very much, and said that Chinese people should be proud of the show.

“New York Audience: The Splendor Is "Pageantry and Elegance"”