(Clearwisdom.net) The Chinese New Year Splendor staged at Radio City Music Hall on February 4, 2008 attracted a woman from central America who has such a fascination with Chinese culture that she thinks she must have been a Chinese in a previous lifetime. 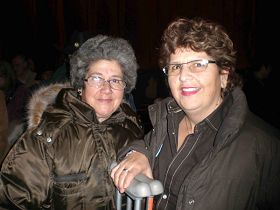 Rosa (left) thinks she must have been a Chinese in her previous lifetime. She said the show tonight made her feel especially tranquil. Marita (right) is Rosa's younger sister

A middle-aged woman whose left leg was injured and placed in a plaster cast and who walked with a crutch watched the show intently. Her name is Rosa and she is from Costa Rica. She was to return to her home the next day with her younger sister Marita. They made a special trip to come to see the Divine Performing Arts' performance. Rosa said, "It's the best performance that I have ever seen in my life."

Rosa continued, "I like those colorful costumes, graceful dances, and especially the spectacular backdrops. It's really spectacular! Wonderful! I'm so happy to be able to see such a performance."

"You know why I came to see the show?" Rosa said, "Let me tell you, I have strong sense that I was Chinese in a previous lifetime."

Rosa further explained, "I feel I have a natural connection with the Chinese people and Asian people. I get along well with the Chinese, and I yearn for Chinese culture. During today's show, I felt especially tranquil."