The NTDTV Chinese New Year Splendor had its first show at the New York City Radio City Music Hall on January 30, 2008. The show received a warm welcome from the audience. 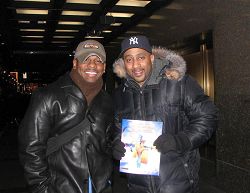 Savoy Walker (right), a fitness trainer, and his cousin Mark Forres (left), who works in human resources, both enjoyed the show.

Savoy Walker, a fitness trainer, and his cousin Mark Forres, who works in human resource, came to the show together. Savoy said, "It was so beautiful, the choreography and the graceful dance. I think it's very good that the hosts introduced the story and the background before each program. It is an excellent performance."

Mark's favorite were the drum dance and the Nymphs of the Sea, "The performance was terrific! It's also educational on history." When asked about what he had learned, Mark shook his head, "I can't explain it with words. It was too beautiful!"

Jeannie, a bank staff, said with excitement, "All the programs are very good. It was so beautiful, especially the women, looked so graceful and feminine." 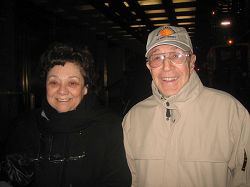 Mr. and Mrs. Marylyn, "The show is terrific."

Mr. and Mrs. Louis Marilyn are retired. They said both of their daughters were born in China, "That is why we love Chinese culture. This show is terrific." 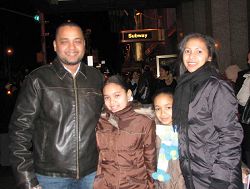 Gentleman who works in the United Health Center and his family are still excited from watching the performance.

"Wonderful! Unbelievable! We have never seen such a great performance before. It's great!" said a gentleman who works in the United Health Center as he stepped out of the theater. He was still excited about the show and said, "I love the show, and so did my family. It is meaningful." He said he would recommend the show to his Chinese colleagues.