Ren Wanting: No Matter How Many Times I Watch the Show, I'm Always Moved to Tears (Photo)

At 10:30 p.m. on January 30, 2008, the first of fifteen Chinese New Year Splendor performances in New York Radio City Music Hall came to a close. Mr. Ren Wanting, a strong supporter of human rights, said after watching the show that no matter how many times he watches it, he is always moved to tears. 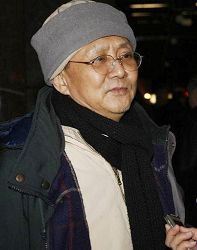 Mr. Ren accepting interview, still has tears in his eye

He said that he was unable to enjoy the shows produced in mainland China. He said that although the mainland China shows were technically good, people can only enjoy the techniques--they do not produce the soul touching reaction. They are like fake flowers that do not have any fragrance.

This performance brought to Mr. Ren's conscience the message of justice. Mr. Ren said, "Under the Chinese Communist Party's rule, society has declined. The CCP makes everything serve the dictatorship, including the culture and arts. It neglects conscience, justice and ethics in order to ensure its power. The Party culture has largely ruined and twisted humanity. Although the CCP claims to want to build a harmonious society, it is actually the cause of social decline and disharmony."

"But the genuine Chinese traditional culture - conscience, eastern ethics, justice, ecumenical values which are brought by the Divine Performing Arts will bring hope and life to the entire world. You could feel people's hearts responding in the warm applause when Truthfulness-Compassion-Forbearance appeared on the backdrop."