Australia: Melbourne Parade Supports 45 Million People Who Have Withdrawn from the CCP (Photos)

(Clearwisdom.net) "I'm pleased to see so many people participate in the parade. All Chinese people should know of this situation. These materials (referring to the Nine Commentaries on the Communist Party and other materials) should be sent to China by air, so everyone can read them," Chinese tourist Mr. Chen said excitedly.

On November 29, 2008, the Melbourne Quitting-the-CCP Service Center held a parade and rally supporting the 45 million brave people who have quit the Chinese Communist Party (CCP) and its affiliated organizations. It happened to be the Christmas shopping season, and the business streets in downtown Melbourne were bustling and lively, full of people. Wonderful waist drum performances, plus all kinds of banners and flags, attracted many tourists and local citizens to stop and watch. A reenactment of the CCP's organ harvesting from living Falun Gong practitioners, in particular, drew many people's attention who came up to find out more about it. More and more overseas Chinese students took out their cell phones, and carefully took photos of the messages on each banner. People who have learned the facts gave the thumbs-up gesture and said, "Well done! Keep it up, please!" 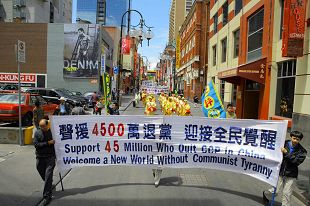 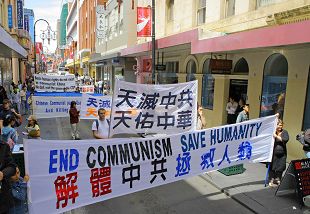 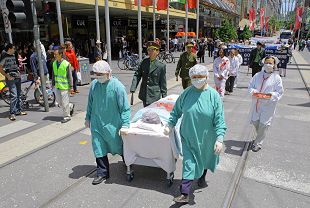 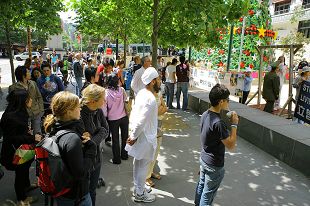 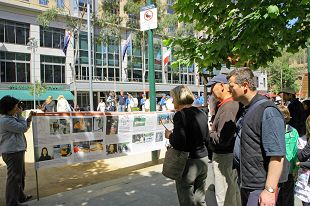 After the parade, a rally was held at City Square in downtown Melbourne. Representatives of the New South Wales Falun Dafa Association, the Coalition to Investigate the Persecution of Falun Gong in China, The Epoch Times Melbourne Branch, and volunteers for quitting the CCP made speeches. Over a dozen meter-long truth-clarification display boards drew the attention of many people. The Melbourne Divine Land Marching Band, composed of Falun Gong practitioners, made its first appearance. The spirited and majestic performance adding to the momentum of the rally.

A Tourist from China: "Falun Gong is the spirit of the Chinese nation"

Chinese tourist Mr. Chen watched the parade and read the truth-clarification materials. Excited, he said, "Truthfulness-Compassion-Forbearance is great. When China changes to become normal in the future, Falun Gong's spirit should be the foundation on which the country is built. The Communist Party should disintegrate quickly, just like what occurred the former Soviet Union and East Germany, both disintegrated overnight... our China needs a spirit, and I feel that Falun Gong is the spirit of the Chinese nation."

The Melbourne Quitting-the-CCP Service Center was established in early 2005. Falun Gong practitioners worked as volunteers at the service center. They disseminate the Nine Commentaries on the Communist Party, urge people to quit the CCP and its affiliated organizations, explain the facts about Falun Gong and thus offer salvation to Chinese compatriots. They have quietly spread the Nine Commentaries and offered the blessing of "three withdrawals" in every corner of Melbourne [withdrawing from the Communist Party, the Communist Youth League and the Young Pioneers]. Usually, the Quitting the CCP Service Center holds a march and rally to show support whenever the number of withdrawals from the CCP increases by a million. Today at the rally, 18 more people quit the CCP.

A Western young man named Victor was impressed by the rally. He saw the rally and photo exhibit, which reminded him of his childhood. His family came to Australia to avoid the persecution of the former Chilean autocratic regime. He said, "But for the autocratic regime, who wanted to leave our beloved home and relatives? I respect all that you have done, please keep it up, and good luck to you."

The same day, the number of withdrawals from the CCP and its affiliated organizations exceeded 46 million. Entering November, the average number of withdrawals per day has held at around 40 to 50 thousand. The Nine Commentaries on the Communist Party, published in November 2004, has freed Chinese people from the CCP specter's poisonous lies and violence. Every parade and rally supporting the withdrawals is cleansing Chinese people's thought, and helping awaken people's conscience.