(Clearwisdom.net) The Divine Performing Arts International Company completed its second successful show in Houston on the evening of December 23, 2008. The show celebrated the essence of five thousand years of traditional Chinese culture, gave the audience members a feeling of pure compassion and beauty and uplifted their spirits. 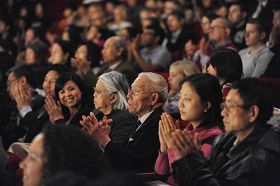 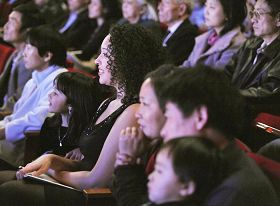 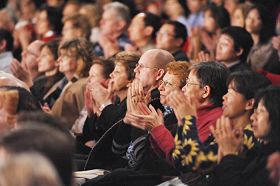 Deputy Consul General of France: I appreciate the quality of the performance

France Deputy Consul Mattieu Clouvel had high praise for the DPA show. He said, "I'm glad I came to the Divine Performing Arts show. It was well-organized. I appreciate the quality of the programs. The dancers are well-trained, very professional."

Mr. Clouvel said that he liked the "Yi Ethnic Dance", and also "Dance of the Snow-capped Mountain", where young performers danced energetically and enthusiastically.

His assistant said, "I liked all the programs. The scenery was beautiful, the dances were wonderful. The colors were vibrant, a very enjoyable experience."

Celia Lavders, a person in charge of the distribution department of a high-tech company, said, "The dance performances had strength, and were very beautiful, full of China's history and culture." Her husband said, "The show was excellent." 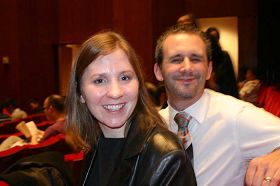 Celia Lavders and her husband at the DPA show in Houston 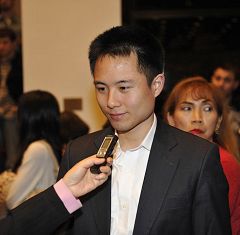 James Tang, who works in a bank, was deeply impressed by the show. He said, "The show fully exhibited five thousand years of Chinese culture."

A young Chinese couple, Mike and Ellen, walked out of the theater after the show with beaming smiles. Ellen said, "Wonderful, very meaningful. The show brought a good message for us, I was very clear about it. I liked Ji Gong in the dance drama 'Monk Ji Gong Abducts the Bride.' He saved people by means of abducting the bride. Sometimes we have puzzles in life, we need someone to show us the right path." Mike, Ellen's husband, is an engineer. He said, "Divine Performing Arts is like crystal-clear flowing water--it gives us inspiration."