The Divine Performing Arts Touring Company arrived at its second stop on its world tour--Sarasota, the cultural center of Florida, and presented the first show at the Van Wezel Performing Arts Hall on December 22, 2008. The audience was fascinated by the show and gave it lavish compliments.

Banker: It is the most fantastic show that I've ever seen

Tess, who had just walked out of the theater said, "The show was really fantastic, super, brilliant!" Her husband, Bob, a banker, chimed in, "It was incredibly beautiful."

She agreed and said, "The drummers, the dancers, and their costumes..." Before she finished, Bob cut in and said, "They were extremely beautiful." He continued to say that he had seen performances by Asian troupes before, but the DPA show was the best that he had ever seen. He thought the dancers were so flexible and nimble, yet expressed such delicate emotions--an awesome combination.

Company manager: The show was unusual. I had a feeling of soaring

Brian is a company manager. He praised the show for being so unusual and giving him a feeling of soaring. He said he liked the dance with pink blossoms, and he also liked the stories portrayed in the show. He thought they were easy to understand, very interesting to see, and inspiring. His wife shared the same sentiments. She thought every female performer was like a part of a flower. They seemed like to fly in the air, easily assuming different postures and formations, and then forming a complete, beautiful flower.

Sarasota Mayor: It's exciting and thrilling

Lou Ann Palmer, Mayor of the City of Sarasota, brought her entire family of seven to the Divine Performing Arts show. She said, "I wanted to make sure they all had the chance to enjoy this. It's an incredible cultural event for the City of Sarasota." Mayor Palmer said, "We have concerts, and we have Broadway shows, but to have something uniquely oriental for this part of the world is a little unusual, but it's so exciting and thrilling." 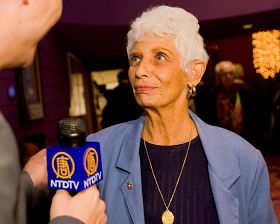 Mayor Palmer, who used to be a dancer and choreographer, found the show to be incredibly beautiful. She thought that everyone would appreciate the show. "It's a unique performance for Sarasota, the cultural center of Florida." She praised the performers and said that she could see that the dancers performed with great emotion.

Mr. Don Elder, the mayor's son-in-law, offered his comments: "It was an interesting cultural comment about truth and morality mixed with music and dance. It highlighted the current human conflicts [in China] and the relationship with, and the understanding, of truth."

Mayor Palmer said, "The show was brilliant--absolutely brilliant. I hope it comes back to Sarasota. We'd love to see it here again."

The Divine Performing Arts Touring Company presented its second show in Sarasota at 7:30 p.m. on December 23. For more information about DPA, visit http://DivinePerformingArts.org.

“Eliminating the Pursuit of Gain; Assisting Master with Righteous Thoughts”

“Conductor: 'Not only an artistic but [a] spiritual endeavor' ”