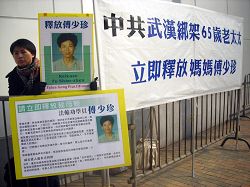 (Clearwisdom.net) I live in Hong Kong, but my mother and younger sister live in Mainland China. My 65-year-old mother's name is Fu Shaozhen. At 34 years old, she had to raise my sister and me all by herself. In the spring of 1990, my mother suffered from a swollen colon and needed three major surgeries. Even after the surgeries, she could only eat liquid food.

Less than six months later, my mother had three more surgeries, each lasting longer than eight hours. This greatly affected my sister and me. Besides taking care of my mother in the hospital, we had to go to her workplace, Echeng Food Market in the Hanjiang District of Wuhan City, to ask for money to pay for her medication. The company did not give us the money because it was losing money. Instead, some of my mother's colleagues and our neighbors kindly helped us by donating some money.

In 1995, my mother came upon Falun Gong when she went to a park to do some exercises. Several months after she started practicing Falun Gong, all her illnesses, including the arthritis and body and stomach pain, disappeared. This made my family very happy. All of our neighbors and relatives witnessed the miracles of Falun Gong. My mother always held herself to the standard of a good person wherever she went and considered others first by following Truthfulness-Compassion-Forbearance. For many years, the hallway in our building was very dirty because no one cleaned it. After my mother practiced Falun Gong, she always cleaned the hallway without telling anyone. Our neighbors were very moved by her kindness.

After becoming a practitioner, my mother was healthy and did not need to take anymore medication, so we stopped going to her company to apply for reimbursement. The managers at her place of employment were all very surprised.

However, in July 1999, Jiang Zemin began persecuting Falun Gong. My mother went to the State Council Appeals Bureau to tell the government the truth about Falun Gong. As a result, she was sent to the Wuhan City Government's Liaison Office in Beijing.

She was then escorted back to our area by the Wuhan police officers. For two days she was detained in a cage in the police station before being transferred to the Minyi Health Center in the Hanjiang District, Wuhan City. There they tried to force her to give up practicing Falun Gong. During this time, we had to pay 30 yuan every day for her so-called "living expenses." My mother refused to be "transformed" and was thus "illegally detained" until the end of December 1999. Beihu Police Station officials released my mother under the condition that my sister sign a guarantee statement that she would monitor our mother at home.

Less than two months later, on February 19, 2000, the Chinese Communist Party personnel confiscated my family's property and took my mother to Wuhan First Detention Center. The guards there handcuffed my mother's hands over her head to an iron gate while she stood on her toes. She was not allowed to eat or use the restroom. More than a month later, she was transferred to a brainwashing center in Wuhan Welfare Center, where she was relentlessly persecuted for over 30 days. When they failed to "transform" her, she was transferred to the Erdaopeng Brainwashing Center in the Hanjiang District of Wuhan City for further persecution.

To protest the persecution, my mother went on many hunger strikes. At that time my pregnant younger sister was close to giving birth and asked the police station officials to release our mother to help her take care of her baby. The police and the personnel at the brainwashing center denied her request. It was only due to the condemnation of other practitioners in the brainwashing center and our family's efforts that the Beihu Police Station officers removed their home monitoring of my mother and released her to take care of my younger sister on September 22. However, on November 25, 2000, only 25 days after my sister gave birth, officials from the Hanjiang Police Sub-bureau and the Beihu Police Station confiscated my family's property again and arrested my mother, who was only able to put on a pair of slippers before they took her away. She was "illegally imprisoned" in Wuhan First Detention Center and tortured.

On December 30, 2000, local police officers sent my mother straight to Hewan Forced Labor Camp in Wuhan City. Four criminal detainees closely monitored her. At one time she was locked in a dark room alone. After suffering so much torture, she became melancholic. I went to Wuhan to visit her in the forced labor camp. My sister and I had to negotiate with the authorities at the camp several times before they allowed us see her. My mother's expression was dull and she was absentminded. In addition, she was emaciated.

We learned that my mother could not sleep or eat regularly because of her depression. She depended on medication. During this period, her medical expenses were around 300-500 yuan each month. This put a lot of stress on my sister, who was already financially strapped.

On August 29, 2001, my mother was released from the labor camp and went to stay with my younger sister. She fully recovered only through studying the Fa and doing the Falun Gong exercises. This gave her great confidence in the Fa. Our relatives and friends also exclaimed in surprise over the miracle of Falun Gong.

In April 2002, when my mother heard that officials in the Hanjiang District would illegally try several practitioners, she decided to go see for herself. Immediately after she arrived at the entrance to the court, she was arrested by plainclothes police and put into a vehicle. They slapped her face and kicked her legs with their heavy military boots. She suffered blue and purple bruises and could barely walk. She was then taken sent to the Beihu Police Station. She was able to escape but then had no choice but to become homeless to avoid being arrested again.

On December 25, 2007, my mother was arrested again when she was distributing truth clarification materials at the entrance of the Nanhu sub-District Zhongbai Supermarket in the Wuchang District, Wuhan City. Without any due process, she was taken to the Wuhan First Detention Center in the evening and is there even now.

My mother is a law-abiding citizen. When the persecution of Falun Gong first began, she followed the Chinese Charter and Constitution to appeal for Falun Gong but was illegally imprisoned and persecuted. In order to let more people know the truth about Falun Gong and the persecution and the crimes of the Chinese Communist Party (CCP), my mother began to distribute truth-clarification materials and talked to people. After my mother was arrested on December 25, 2007, I immediately appealed to people around the world for their support to help rescue her. I also called the Wuhan Municipal Police Station, the Wuchang Police Station, the Nanhu Police Station, the Wuchang District Procuratorate, and the Wuhan 610 Office many times, and I peacefully appealed outside the Central Government's Liaison Office in Hong Kong. After the Hong Kong members of a legislative assembly found out about my plight, they immediately negotiated with the CCP and asked that the Chinese Communist regime release my mother with a "not guilty" verdict. Under pressure, the Wuhan 610 Office deceived my aunt and her husband, who do not practice Falun Gong, by saying that they would release my mother immediately after the Olympic Games was over. My aunt and her husband believed their lies. The Wuhan 610 Office then carefully arranged for my aunt and her husband to travel to Hong Kong and Macao. In reality, they came to Hong Kong to try to stop me from exposing the crimes of the CCP to the world and from going forward with my worldwide appeal to rescue my mother. The Olympic Games has finished, but my mother has not been released by the Chinese Communist regime. She is still imprisoned and being tortured. I have heard that they will illegally sentence her. Their lies have been exposed yet again.

“Do Not Ignore the Attachment to Gain”