Professor Tang Zhen, a renowned vocal music educator, just retired from the Music Department of Taipei National University of the Arts. She recently went to see the "Truthfulness-Compassion-Forbearance" International Art Exhibit which is being held at the Shih-lin Citizens' Hall. When she saw paintings depicting the suffering of Falun Gong practitioners due to the persecution in China, she put her hand to her chest and said: "So brutal! So Brutal!" 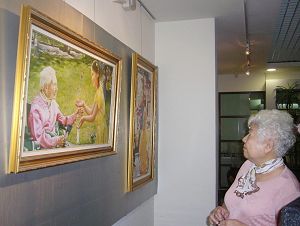 Professor Tang was sent to Europe to when she was very young, and her father told her: "Study hard and don't come back." She later learned that her home was ransacked during the Cultural Revolution. As a result, she would become fearful whenever she saw the Communist Party's five-starred red flag. When Tang Zhen saw the paintings depicting the suffering of practitioners persecuted in China, she told an exhibit guide: "It's so brutal. This is equivalent to the Roman Empire's persecution of Christians."

When she saw a painting entitled, "Organ Harvesting from Living Practitioners," she asked the guide, "Is this true?" Upon learning that the Chinese Communist Party has been systematically harvesting organs from living practitioners, she said that her heart was pained and she was shocked to learn that such brutality was still happening in China.

Professor Tang said that all of the paintings in the exhibition were very good, conveying the cultivators' message of Compassion. "Pure hearts can truly touch people," commented Professor Tang.