Singapore: Introducing Falun Gong and Clarifying the Truth to the Public at Hong Lim Park (Photos)

On Sunday afternoon, November 9, 2008, Falun Gong practitioners in Singapore held a series of activities at Speakers' Corner at Hong Lim Park. They introduced Falun Gong and told how it has spread around the world since its first introduction to the public in 1992. The activity drew attention from passersby. 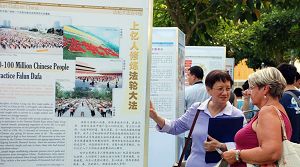 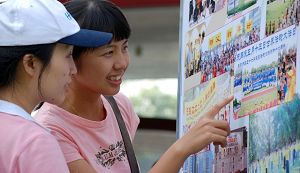 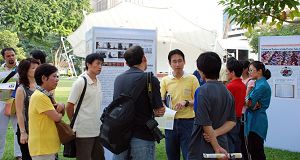 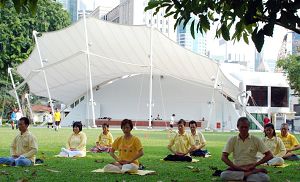 On the lawn practitioners displayed over a dozen poster boards with pictures and information about Falun Gong's worldwide presence, its development in Singapore, the awards and proclamations honoring Falun Gong from governments around the world, and the Chinese Communist Party's persecution of Falun Gong. Behind the display boards, a group of practitioners demonstrated the five exercises accompanied by serene music, and several other practitioners stood by the display boards to answer questions from passersby. Hong Lim Speakers' Corner is close to Chinatown. A number of passersby and tourists were drawn to the peaceful exercises to find out more. Several Western tourists were so interested that they took pictures of the event. Some Chinese overseas students and workers were surprised and then came over to read the information on the display boards. They listened attentively to practitioners' explanations and collected even more information.

A Vietnamese overseas student just started practicing Falun Gong not long ago. He said that the practice is excellent, that it teaches people to be good, and that the Chinese Communist Party's persecution is wrong. Another young student said that he had read many articles written by Falun Gong practitioners. They renewed his confidence in life and helped him find his life's direction, because society had been such a disappointment to him before. He saw a notice in the newspaper about the event at Speakers' Corner and came to offer his help.

Mr. Pan is a bank clerk. He had read in the newspaper and seen on TV many reports about Falun Gong, and had a negative impression of the practice. He said, "Not until today when I passed by did I realize that Falun Gong is good." He said he had been using the computer all day long and was very tired and just wanted to find a good way to keep fit. When he saw the ads about "Falun Gong Nine-Day Class" (free of charge), he was very pleased and said he would like to try it.

Practitioner Mr. Hong said that many people in Singapore misunderstand Falun Gong because they have read many distorted reports reproduced from the Chinese Communist Party's official media. He wanted to take the opportunity at this event at Speakers' Corner to tell people the true situation. "Falun Gong has been practiced and cherished by people in over 80 countries, and it has even been introduced in middle and primary schools. I hope that people in Singapore understand that Falun Gong is good." He thought the activity was positive, allowing people to get in touch with the truth and having their misunderstandings clarified.

Practitioner Mr. Lim said that many Singaporeans generally do not have much opportunity to have close contact with Falun Gong like this, so today's activity at Hong Lim Speakers' Corner was meaningful. He said that practitioners will continue to hold similar activities to approach the public through a variety of means in order to disseminate the truth about Falun Gong.

“Finding the Attachment of Selfishness”