(Clearwisdom.net) On October 5, 2008, Divine Performing Arts staged its fifth performance in Geneva. As the show came to a conclusion amid enthusiastic applause, the performers came back to the stage for three curtain calls. The audience was slow to leave, savoring the wonderful experience. Thus, Divine Performing Arts ended a successful five days of performances in Geneva.

Celebrities from all walks of life in Switzerland attended the shows. Divine Performing Arts, with its spirit of pure kindness and beauty, deeply impressed the audience. 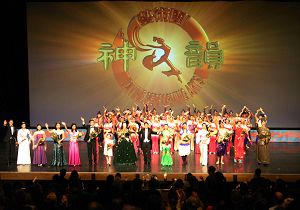 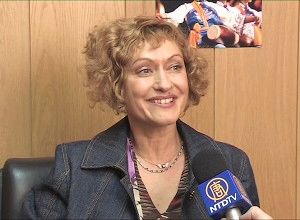 Brissonskaja, a dancer, attended the third performance in Geneva. She said after the show that she recognizes good dance skills, and she saw them in the Divine Performing Arts.

She told the reporter, "The movements of the artists in Divine Performing Arts demonstrated grace--their arms, hands, even the heads all demonstrated grace." "Their leaps were so light, this quality is not often seen in Europe."

Brissonskaja said that watching the performance made her feel relaxed and comfortable, and remarked that the colors were beautiful, full of energy and vigor. The drum performances showed flawless coordination, and were highly professional. She said, "I think, if they performed 'Swan Lake,' we would actually see flying swans."

Artist: I think the performance was absolutely fantastic! 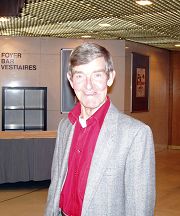 Elni, from a family of artists

Elni's uncle is a well-known painter and sculptor in Switzerland. He said, "I think the performance was absolutely fantastic! All the dancers' costumes were incredibly beautiful. The performers' dance postures were beautiful, and their movements were also graceful and flexible. The stage designs, in particular the scenery on the backdrops, was magnificent. What surprised me was the music; I felt the music was not only Chinese music, it seemed that they were blending something from European music. Very nice to listen to. The designs of the stage and backdrop impressed me deeply. I appreciated the animated Buddhas' images on the backdrop."

Fashion designer: We should rediscover our heart 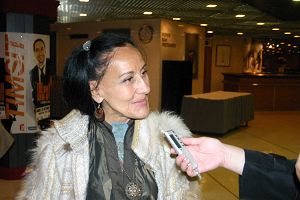 Freya, a fashion designer, said, "It was a holistic, harmonious and elegant performance. The dance skills are superb. Just as the hosts said, the dance includes rhythm, form and technique. The performers danced so lightly and nimbly, the costumes were diverse, and the backdrops were always connected with nature, which I feel is very important. Even behind the grand piano was a image of nature. I felt it very good and beautiful."

She said that as a fashion designer, she thought that the singers' dress gave people an overall impression of being noble and lofty. She remembered the lyrics of one song which expressed that the current moment is very important for us human beings. She said she really sensed the truth in the lyrics, that we should rediscover our heart, and be compassionate. 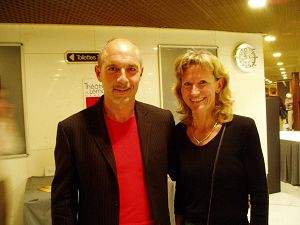 Michel, general manager of a computer company, and his wife

Michel, general manager of a computer company, came to the performance because he had heard about it from others. He told the reporter after the show that the gentle and elegant dance postures, the gorgeous costumes and the messages conveyed, all contributed to the success of the performance. Particularly, the messages behind the individual acts gave the whole show a deeper meaning. He added, "Although there were many performers, the overall coordination was seamless. All the acts were excellent. I particularly liked the drum performances, because the drum beats were synchronized and highly rhythmical."

Michel's wife Konilia is a business assistant in a telecommunications company. She told the reporter that the performance was really excellent. She said that everything as a whole was in great harmony, giving people a wonderful feeling. It reflected the beauty of Chinese culture. She said that the costumes were absolutely beautiful, and so were the dances, which are different from western dances. She added she enjoyed the show very much.

Economist: It was the first time I've ever seen such a wonderful performance

This was the first time that Economist Barstan saw a Divine Performing Arts performance. She was completely moved by the show. She told the reporter a bit emotionally, "It's great! In terms of colors, dances and the music, everything was excellent, fantastic and inspirational." she said that she would definitely be happy to come to see it again if Divine Performing Arts comes to Geneva again.

Dentist: It's really a pleasant surprise to see the performance 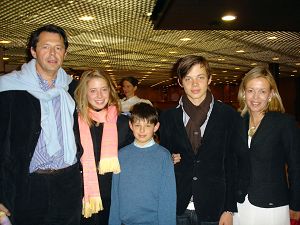 Dr. Brown and his family

Dr. Brown's wife Alice is a legal worker. She said that she was amazed by the dazzling artistic expression in the performance. She saw a lot of human values also - compassion, hope and dignity, all of which touched her. She kept expressing her admiration and appreciation.

University professor: I hope such a performance will go to more places to perform

Maria is professor of economics at Geneva University. She told the reporter, "I'm very happy to see the performance, it makes me feel uplifted." She added, "I appreciated the colors, the choreography, and particularly the music; Divine Performing Arts perfectly incorporated Chinese and Western musical instruments. The dance movements were full of expressiveness, conveying something on a spiritual level. Another point that impressed me was that the hosts gave the audience a brief introduction before each number, which helped those who were not familiar with the program to better appreciate it. Human beings' understanding of human nature is virtually identical. We share common feelings, beauty, human nature and even something on higher levels. Divine Performing Arts expressed all this. I hope that such a performance will go to more places to perform."

“Propaganda Before its Time: Xinhua News Mistakenly Runs Report of Successful Shenzhou-7 Space Mission Before the Launch Even Occurs (Photo)”