On October 21, 2008, the Falun Gong Human Rights Working Group and several Falun Gong practitioners who personally suffered the persecution or whose family members are still subjected to the persecution in mainland China, met with Ms. Asma Jahangir, United Nations Special Rapporteur on Freedom of Religion or Belief. The meeting took place at the United Nations Headquarters in New York City. Spokesperson of the Falun Gong Human Rights Working Group Dr. Chen Shizhong explained to Ms. Jahangir the serious situation of the Chinese Communist Party's (CCP) persecution of Falun Gong, and several other Falun Gong practitioners recounted their personal experience or their family members' experience of the persecution in mainland China. 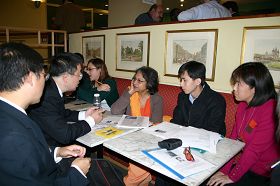 Special Rapporteur Ms. Jahangir (the third from the right) listens to the latest situation regarding the persecution of Falun Gong in China (Photographed by Hong Wei)

Witnesses to the persecution participating in the meeting included:

Hu Zhihua--his younger brother Hu Zhiming was sentenced to prison twice. His legs become atrophied because of the persecution. Even in this condition, the prison authorities refuse to release him or give him medical treatment. Hu Zhihua's family members had to send a wheelchair to the Nanshan Prison in Jinzhou City, Liaoning Province. Hu Zhihua's younger brother was a researcher at a national defense unit, and now he can only spend his days in prison in a wheelchair that his family members sent to him.

Huang Wanqing--his younger brother Huang Xiong called him from Shanghai in April, 2003, telling him that he would leave Shanghai because the police had been pursuing him. Since that phone call, Huang Wanqing has never heard from his younger brother and his whereabouts are still unknown. His family members in China have been looking for him, and a U.S. congressman also helped Huang Wanqing to send a letter to inquire about Huang Xiong's situation, but to no avail. Since the revelation of the CCP's organ harvesting from living Falun Gong practitioners, Huang Wanqing has been even more worried about his younger brother's safety. Ms. Jahangir, who has been following up on the issue of the CCP's organ harvesting from living Falun Gong practitioners, expressed great concern.

Zhang Shuangying--her father Zhang Xingwu and her mother Liu Pinjie were arrested from home in July 2008. Ms. Liu showed symptoms of being seriously ill at the time but the police still carried her away. After being detained for 24 hours, their relatives carried Ms. Liu back home after the police extorted them out of 10,000 yuan. Mr. Zhang was said to be sentenced to ten years in prison without going through any legal procedure.

The three witnesses delivered their appeal letters to Ms. Jahangir.

Regarding the Falun Gong practitioners' appeal, Ms. Jahangir listened carefully and showed sympathy and concern. She asked for materials from all the witnesses to the persecution.

Since 2001, the Falun Gong Human Rights Working Group has repeatedly reported persecution cases to Ms. Asma Jahangir. Ms. Jahangir has learned about the CCP's brutal persecution of Falun Gong, and has expressed explicit condemnation of the CCP. In her annual report to the UN in 2003, Ms. Jahangir condemned the CCP for using torture on Falun Gong practitioners. She stated that its brutality is beyond description. In June 2004, she questioned CCP authorities about 907 cases of torture death of Falun Gong practitioners. In October 2004, she and six other UN Special Rapporteurs on Human Rights jointly questioned CCP authorities about the persecution of Falun Gong, particularly the CCP's crime of harvesting organs from living Falun Gong practitioners. After the Falun Gong Human Rights Working Group delivered an appeal to the UN in March 2006, Ms. Jahangir and UN Special Rapporteur on Torture Manfred Nowak requested that the CCP give an explanation about the appeal. Although the CCP denied the inquiry in its response in November 2006, facing a large number of convincing evidence provided by the Falun Gong Human Rights Working Group and other organizations, the two special rapporteurs once again requested the CCP to give an explanation. They requested that the CCP provide sources for the organ transplantations and explain the relationship between the beginning of the persecution of Falun Gong in 1999 and the sudden increase of organ transplantations since 2000.

As the United Nations special rapporteurs are appointed by the United Nations, they have binding force over all member states. The CCP that has long been refusing other democratic countries' inquiries with an excuse of "interfering with its internal affairs," had to respond to the inquiry by the UN special rapporteurs. After Ms. Asma Jahangir and Special Rapporteur on Torture and Special Rapporteur on Violence against Women made an urgent inquiry over the case where police in Zhuozhou, Hebei Province raped two women Falun Gong practitioners on December 29, 2005, the CCP had to admit to the charges.

Other than continuous inquiries, Ms. Asma Jahangir has deeply condemned the CCP's persecution of Falun Gong. For example, in her annual report to the UN Human Rights Commission in 2008, Ms. Jahangir stated regarding the rape case in Hebei Province, "Women and prisoners are both placed at a particularly evident weak position. It is extremely important to guarantee that the national legislation and administrative system can provide adequate protection and effective treatment for victims. The report stated that another police officer was at the scene during the two rape cases. This police officer did not intervene and stop the crime."

Special Rapporteur Ms. Asma Jahangir has become an international authority on human rights that the CCP fears, and the CCP has pressured Ms. Jahangir. It told lies that Falun Gong is not a belief or a religion, so the Special Rapporteur on Freedom of Religion and Belief should not be concerned about it. The CCP attempted to stop Ms. Jahangir from condemning its atrocities in the persecution of Falun Gong. Regarding this, Ms. Jahangir consulted the Falun Gong Human Rights Working Group, and after receiving an explanation on Falun Gong cultivation, Ms. Jahangir revealed to the public the CCP's interference and pressure on her in her annual report to the United Nations in 2008. She also firmly replied to the CCP, saying "to decide or review religious belief ... does not belong to the term of reference of any country or other groups." She also cited former Special Rapporteur on Human Rights Rosalyn Higgins, "firmly oppose the point of view believing that the country has the right to determine if it is a true religious belief. The teachings of a religion should be defined by its believers." Regarding the CCP's pressure, Ms. Jahangir replied explicitly, "The special rapporteur continues to pay great attention to the continuing violations that Chinese Falun Gong cultivators suffer in terms of freedom of religious belief."

Ms. Jahangir is an internationally respected pioneer of human rights. Time Magazine honored her as "Asia's Hero." She was born into a prominent family in Pakistan, and she engaged in human rights causes at a young age. She was appointed UN Special Rapporteur on Extra Judicial, Summary or Arbitrary Executions in 1998 and was appointed UN Special Rapporteur on Freedom of Religion or Belief in 2005.

“Master Protected Me When I Was Arrested”