Every day about 40 practitioners gather at the Long'an Park practice site in Taoyuan, northern Taiwan. The practitioners come from different places and from all walks of lives. Most of them are relatively new in the practice, but they are all grateful and steadfast for Falun Dafa has renewed their lives. 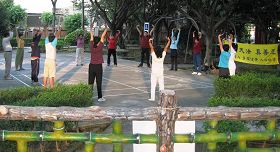 The group exercises together every morning 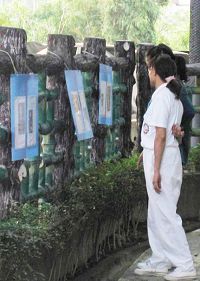 Ms. Chen used to have bad temper and poor health. She relied on sleeping pills at night. A few days into the practice, she could sleep through the night without taking sleeping pills. She said that she used to seek after petty advantages. After she practiced Falun Dafa, she stopped being greedy and bargaining while shopping--she buys what she thinks is reasonable and walks away if she doesn't.

Ms. Chen also became more compassionate toward others. When she goes south by train, she gives up her seat to the elderly, though she is 60 years old herself. She wouldn't have done this before she practiced Falun Gong and she was glad to see how she had changed. 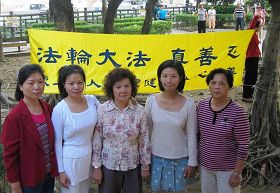 Studying the Teachings Every Day

Ms. Wu Yingyue is 56 years old and has been practicing Falun Dafa for three months. A friend of hers introduced her to the practice. Ms. Wu was amazed to see how her friend's health improved greatly shortly after she practiced. She started reading Falun Dafa books and was deeply moved. She felt the teachings were extremely profound and powerful in elevating her thoughts. When she encounters conflicts, she reads the books and follows the teachings.

No matter how busy she is, she takes time to study the teachings, even that means shortening her sleep time. Ms. Wu said she still has too many attachments and will try to do better in the practice to reach a higher realm.

Ms. Zhuo Peifen is 30 years old and has been practicing for six months. Every time she hears the exercise music, she is comforted and she often sheds tears while doing the exercises. She feels relaxed and free from worry after doing the exercises and brings this attitude home with her. Her children get sick less often since she started the practice and they often remind her if she forgets to do the exercises.

Ms. Zhuo said she is really happy now because she understands why human beings get sick--because their minds are unhealthy and shackled by desires. If a man's soul is guided by correct principles, the mental and physical fatigue can be easily overcome.

Ms. Zhuo said she used to have chest pain and neither Chinese medicine nor jogging helped. Practicing Falun Dafa has improved her health tremendously. She said her mother is a Buddhist and she was familiar with Buddhist teachings since she was little. She was glad she found Falun Dafa, a way that really resonates with her soul and can lead her home.

Clarifying the Facts of the Persecution to Police in China

Mr. Yang Zhiyuan started the practice four years ago. His health greatly improved. He used to have problems in his lower back, kidney and liver and was always tired and suffered from allergies. Not only did his health improve, but he also gets along with others much better now. He used to fuss over little things. Now he takes things lightly and feels really relaxed.

Grateful for the changes Falun Dafa brought him, Mr. Yang often clarifies the facts about the persecution to the police in China over the phone. He has been to Hong Kong a dozen times to tell Chinese people about the Nine Commentaries and help them to quit the Chinese Communist Party and its affiliated organizations. What impressed him the most in Hong Kong was that when the Chinese tourists in the tour buses often raised their thumbs, waved their hands, or took pictures of the practitioners when seeing the practitioners holding up signs. He said everyone has the knowing side and the right to know the true situation.

In recent years, more and more Chinese people have learned the truth and their attitude towards Falun Dafa is no longer negative. Many of them listen to the facts quietly, and some accept materials. Mr. Yang often calls police officers and people who work in the legal systems to tell them not to participate in the persecution. He remembers one night when he finished making calls to China and was about to rest, he found there was one phone number he forgot to call. He rectified his thoughts of wanting to take a break and called the number. A captain of a domestic security brigade picked up the phone. The captain had received many similar calls before and decided to ask Mr. Yang to help him quit the CCP after a short conversation. Mr. Yang was glad that he did not give up on that number or he would have missed the opportunity to help the captain.

From Sickly to Glowing with Health

Mr. Chen Shizhong used to have melancholia. He had been seeing a psychiatrist for over 20 years and taking numerous pills for insomnia. He attempted to commit suicide several times. After he practiced Falun Gong for less than a month, he no longer needed to take sleeping pills.

He no longer looked fatigue and pale and went back to work. He used to be sickly and now his face glows with energy. His daughter and mother, who is 89 years old, were amazed to see his changes. Now his mother can rely on him for help in her old age.

Kind Behavior Gives Others a Good Impression of Falun Dafa

Ms. Fan Xian has practiced for nearly eight years. She stopped being bothered by little things. One time she was wronged by one of her coworkers, but her kind and patient response earned her respect from her coworkers. Now they all admire Falun Dafa.