Finland: Raising Awareness about Falun Gong at a Health and Information Expo (Photos)

(Clearwisdom.net) The annual Helsinki Health and Information Expo has always been a good place for Finnish Falun Gong practitioners to raise awareness about the practice. On October 18th and 19th, practitioners returned to the Expo. They displayed a banner reading "Falun Dafa Is Good," as well as Falun Dafa books and leaflets, to introduce the practice and expose the truth of the CCP's brutal persecution of Falun Gong practitioners in China. They appealed to the Finns to lend a hand to help stop this persecution. 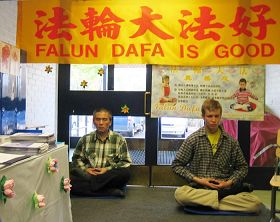 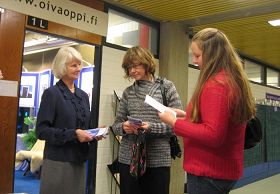 Practitioners introducing the facts of the persecution 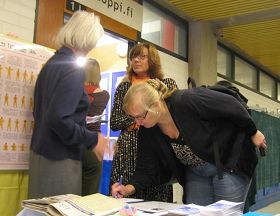 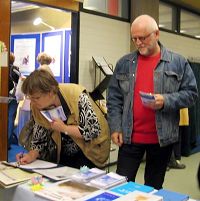 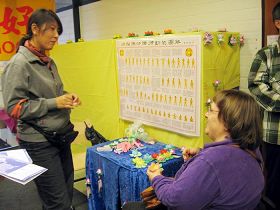 "I can feel the energy," said a lady in a wheelchair when she was given a lotus flower

Practitioners demonstrated the five Falun Gong exercises accompanied by traditional Chinese exercise music. Books on the Falun Gong principles and a variety of informational materials were displayed on the table. Visitors were interested in information on the atrocity of the CCP removing organs from living practitioners. A petition form was displayed on the table and many visitors came forward to sign to express their support.

Heikkil, a mechanical engineer and a Muslim, talked to a practitioner for a long time. The following day, he brought his two friends. They signed the petition to end the persecution, and received a copy in English of the Nine Commentaries on the Communist Party, an editorial published by The Epoch Times newspaper. They said said that they would pray for the collapse of the CCP everyday.

A practitioner who has recently come to live in Finland told of his own experiences of being abducted and locked up four times by police in China for not giving up his belief, as well as about the persecution of the minority people of Huizu.

A little girl from Estonia took an English copy of a leaflet and asked about Falun Gong in detail. She listened to a practitioner talk about his own experience of being persecuted in China and the current great tide of withdrawals from the CCP. He gave her an English copy of the Nine Commentaries. She was very grateful and said, "My grandparents all experienced the horrible times during the Communist Party's regime, but I didn't. I thought that China, like the former Soviet Union, had already dissolved the Communist Party. This book is very good. I will look at it and then give it to my friends to read."

Another practitioner had come to Finland from China to visit her boyfriend. Two days after she arrived in Finland, she was told that her mother, Zhenping Chen, had been abducted after she left home. Her sister, who was not at home at the time, is now destitute and homeless. The practitioner said, "People who live in a democratic society are very happy. They have the freedom to choose their beliefs, not like my mother and countless other Falun Gong practitioners who persevere in being good people according to Truthfulness-Compassion-Forbearance and are therefore persecuted by the CCP. In these two days I have seen the kindness of the Finnish people. Many people came forward to sign the petition to support Falun Gong and condemn the CCP atrocities. During the process of saving my mother, we also got help from the Finnish Ministry of Foreign Affairs, MPs, Amnesty International, and the media. I really appreciate that."

“Light from the Candle's Teardrops”