(Clearwisdom.net) On October 18, Falun Gong practitioners from Sydney attended the annual Granny Smith Festival Parade in Eastwood, Sydney. It was the eighth time that practitioners were invited to this parade. 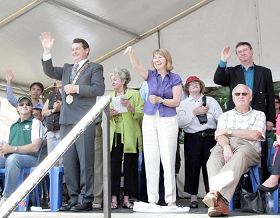 In 1868, Mrs. Smith grew a new brand of apple--the Granny Smith Apple on her farm in Eastwood. The festival is in memory of her.

The host of the parade introduced Falun Gong to the spectators briefly, while the city council member on the stage waved to practitioners.

“Stuttgart, Germany: Learning About the Persecution of Falun Gong (Photos)”