Falun Gong practitioners in San Francisco were invited to take part in the Columbus Day parade on October 12, 2008, for the sixth time. Their performance was warmly welcomed by the spectators. 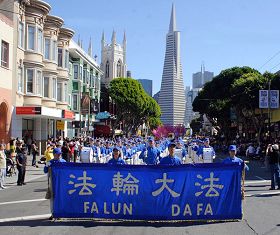 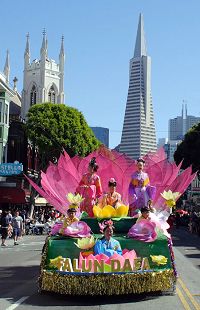 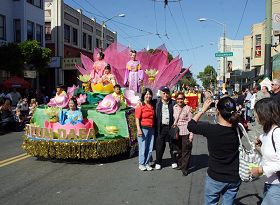 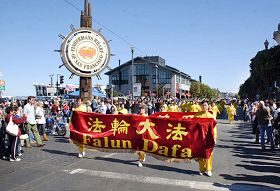 The 140th Columbus Day Parade in San Francisco started at 12:30 p.m. from Fisherman's Wharf, proceeded through Chinatown and Little Italy, and ended in Washington Park.

The Falun Gong practitioners' entry consisted of the Divine Land Marching Band, a float on which practitioners dressed as celestial maidens demonstrated the exercises, and an exercise demonstration team.

Don Casper, organizer of the parade, said that Falun Gong practitioners' performances have been excellent since they first attended the parade six years ago. He also praised the practitioners' costumes.

The Columbus Day parade is one of the largest in San Francisco. This year, more than 440 thousand people watched it.

“Remember to Eliminate Every Human Notion”

“Looking Inward and Breaking Through the Old Forces' Economic Persecution”