(Clearwisdom.net) The NTDTV Chinese New Year Spectacular, performed by Divine Performing Arts, will be staged at the Nokia Theatre in Grand Prairie, Texas, on January 7-9, 2008. US Senator Kay Bailey Hutchinson wrote a letter to commend New Tang Dynasty Television and Divine Performing Arts for promoting Chinese culture within the Chinese American community and the society at large.

Greetings! It is an honor for me to wish all of those attending the 2008 Chinese New Year Spectacular a "Happy New Year!" May you enjoy the rewards of prosperity, friendship, and good health during the Year of the Rat.

I commend New Tang Dynasty Television and Divine Performing Arts for promoting Chinese culture within the Chinese American community and our society at large. The richness and diversity of the Chinese culture, as preserved and extended in the United States, are great treasures to be shared by all of our citizens.

It is an honor to serve the Chinese American community and all Texans in the United States Senate, and I welcome the opportunity to share my New Year's message with you.

With best wishes for a successful 2008. 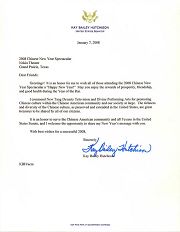