Publishing Company Owner: "Truthfulness-Compassion-Forbearance Is What the World Needs." (Photo)

(Clearwisdom.net) Ms. Jean Richards is a publishing company owner and attended the Chinese New Year Spectacular in Philadelphia on January 5 . She told the reporter that the show was excellent and applauded the principle of "Truthfulness-Compassion-Forbearance" that was presented by the show. 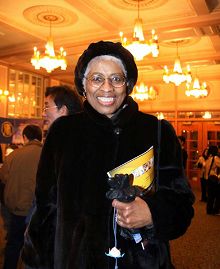 Ms. Richards said that the principle of "Truthfulness-Compassion-Forbearance" is universal and resonates with everyone, regardless of ethnicity, and it is what the world needs. She expressed the belief that everyone in the world affects each other, the world is in need of such ideals.

Ms. Richards said that she didn't have any idea about the show until her friend told her about it, and she also saw advertisements for it. She continued to say that when she heard that the performers were mostly based in North America, she admired them for maintaining their culture, language, and tradition. She said that those traditional Chinese values are important to the world, and that even though they are ancient, they are still quite relevant to the world of today. She said that we should appreciate the things that make us different, rather than letting them divide us.

Ms. Richards expressed her appreciation for the dance "The Power of Awareness" and the Erhu performance. She said that it was very important for young people to look at the world that's within, which was a good message that the program conveyed.

“Mr. Tang Jiuli Died Soon After He Was Taken Into Police Custody”

“Dallas Audience at Spectacular Debut: This Show Is Not Just Excellent Artistry, It's Also Educational (Photos)”