(Clearwisdom.net) The NTDTV's Chinese New Year Spectacular, performed by the Divine Performing Arts, will be staged at the Nokia Theatre in Grand Prairie, Texas, on January 7-9, 2008. US Congressmen Kenny Marchant and Jeb Hensarling from Texas wrote letters of welcome and greetings to the upcoming Chinese New Year Spectacular in the greater Dallas area. Below are the texts of the letters.

Congress of the United States
House of Representatives
January 4, 2008

The Chinese New Year Spectacular offers an exceptional forum to celebrate and admire Chinese arts and culture. I would like to extend a heartfelt welcome to all those of New Tang Dynasty Television (NTDTV), th eDivine Performing Arts, the dancers, singers, artists, friends, and volunteers of this year's event. Thank you for sharing in this celebration of Chinese heritage.

It is an honor to join you in welcoming the Year of the Rat. Please accept my best wishes for an enjoyable event and a healthy, prosperous, and joyous New Year. 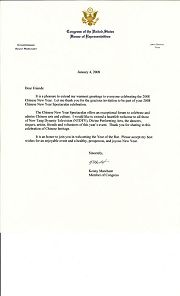 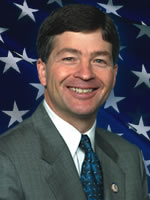 
Congress of the United States
House of Representatives
January 3, 2008

Greetings to New Tang Dynasty Television and all those who are attending the 2008 Chinese New Year Spectacular. I am sorry I will not be able to join you to celebrate the Chinese New Year, the Year of the Rat.

The Asian communities of Dallas and all of Texas have truly enriched our state, and I applaud your efforts to highlight and strengthen these communities through your daily work. They are an integral part of Texas' cultural diversity and important to our state's economic and social structure.

I appreciate your contribution to the community and the opportunity to represent you in the United States House of Representatives. 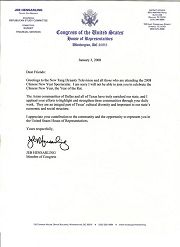