(Clearwisdom.net) On January 6, 2008, the Service Center for Quitting the Party in Malaysia held a parade and rally at Merdeka Square in Kuala Lumpur to support 30 million Chinese withdrawals from the Chinese Communist Party (CCP). 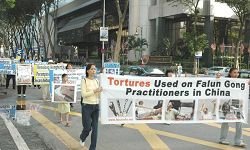 The parade on Jalan Raja Laut 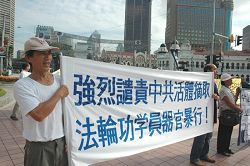 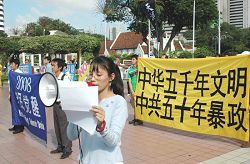 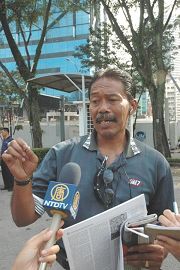 The representative from Mercy Malaysia 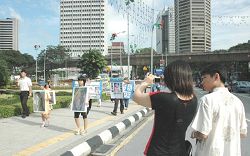 The parade started at 10:00 a.m. with the waist drum team leading the group. The banner team carried banners in Chinese, English, and Malaysian. The parade traveled along Jalan Raja Laut to Merdeka Square.

Along the parade route, volunteers from the Service Center for Quitting the Party handed out copies of the Nine Commentaries on the Communist Party and other informational materials. Many pedestrians and motorists were attracted to the parade. Many Chinese tourists took photos of the parade and talked to the volunteers.

After the parade, a rally was held at Merdeka Square. Ms. Chen Jing, a representative from the service center, called upon people to promote the Nine Commentaries on the Communist Party.

Mr. Shan, a representative from the international organization Mercy Malaysia, said in his speech that people should not only quit the Party physically, but also completely abandon the culture of the Party in their minds. He expressed his appreciation to the Service Center for Quitting the Party for holding this event. He said the activity was good not only for Malaysia but also for the whole world.

Mr. Shan condemned the CCP's harvesting organs from living Falun Gong practitioners. He pointed out that communist regimes maintain their power with lies. He hoped that more people would learn the truth about the CCP.