Atlanta: The Chinese New Year Spectacular Is "A Good Opportunity to Learn about Chinese Culture" (Photos) 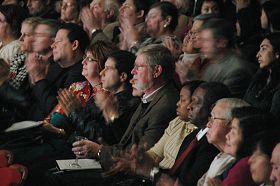 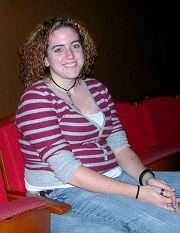 Laura Holland, a psychology student, said that the show is a good opportunity to learn about Chinese culture 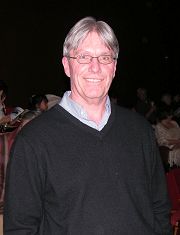 Mark, an engineer in Atlanta, said he enjoyed every part of the show

Laura Holland, a psychology student, said that the show is a good opportunity to learn about Chinese culture. She felt that everyone who saw the show would benefit. Laura said that she enjoyed the Spectacular very much, especially the drum dancing. She said the drummers' movements were very graceful and they are very talented performers. She described the show in three words: "Fascinating," "Graceful," and "Cultural." She said that the art form was an enjoyable and interesting way to learn about Chinese history and culture, and she indicated that she would bring her friends to see the Spectacular next year.

He liked all the performances. He is completely against the persecution of Falun Gong, because it is inhuman and completely wrong. Mark also expressed that he would come to the show next year.

Divine Performing Arts will next travel to Dallas and hold three shows at Nokia Theatre in Grand Prairie on January 7, 8, and 9.