(Clearwisdom.net) Falun Dafa practitioners in France were invited to participate in the Paris Parade Festival, the annual New Year Parade that was held in Chantilly, near Paris. The Falun Gong procession was composed of the European Divine Land Marching Band, a Falun Gong exercise demonstration team, a float, celestial maidens, and practitioners dressed in Tang Dynasty costumes. The crowds cheered as the colorful procession passed. 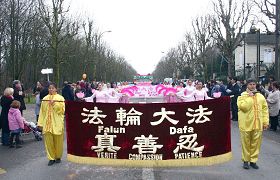 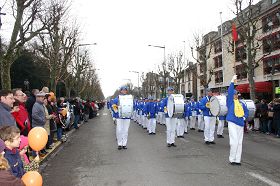 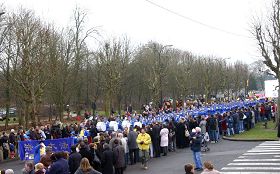 The large Falun Gong procession was warmly welcomed by spectators

Falun Gong practitioners also distributed along the streets a large number of leaflets in Chinese, French, English, and German to introduce Falun Gong and expose the brutal persecution of Falun Gong by the Chinese Communist Party. After learning about the persecution, many people expressed sympathy for the practitioners in China who are suffering and hope that the Chinese people will enjoy freedom soon.