Divine Performing Arts a Hit with Theatergoers in San Francisco

(Clearwisdom.net) The Divine Performing Arts presented their opening show on January 23, 2008 at the Orpheum Theatre in San Francisco. It has quickly drawn the attention and admiration of theatergoers.

"There was something magical and special about the horse coming on to the stage," declared Eva Bossa, a retired Microbiologist from San Jose. She had never seen the type of screen backgrounds used in the show and said, "It was realistic, beautiful and wonderful." She was partial to the vocal pieces because she enjoys songs. She explained, "When the lady was singing and the words were displayed for you to read, I liked that very much. It was so beautiful." 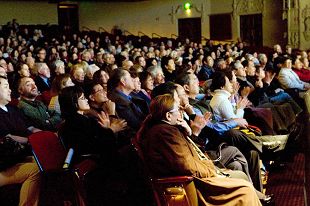 Audience members at Orpheum Theatre see the Spectacular on January 23

A friend treated Marvin Wisner, a retired mailman, to the show and he said, "It is well worth it. I am enjoying it very much." He started to explain that his favorite performance was the dancers in the Manchu Court, but he then realized it was a singer that he liked the best. "The tenor's singing was very good. He has a very wonderful voice."

"Some of the stories we know. The lady who goes to the moon, we have that story in Vietnamese too" explained Yung Pham, a physician from San Jose. She said, "The cultures, Chinese and Vietnamese, are very close but the customs are different." Ms. Pham liked everything about the show.

Tam Le was drawn to the spiritual significance of the performance that portrayed the Falun Gong women in jail. He said, "I don't like oppression. I liked this one because it showed the freedom of the spirit. The spirit has the freedom to do everything."