(Clearwisdom.net) Regarding the Chinese Communist Party's stonewalling of the Divine Performing Arts (DPA) performances in South Korea on January 17, 2008, four Korean human rights organizations jointly wrote to the Chinese Embassy, condemning its interference with South Korean internal affairs and its harassment aimed at the DPA show.

Before this, on January 15, 2008, the Korean sponsor, Sonata Art Planning Company, held a press conference at Press Center in Soeul, strongly condemning the CCP's exporting its cultural terrorism to Korea and its destruction of traditional Chinese culture. They also condemned the CCP for preventing the DPA from performing in Korea. 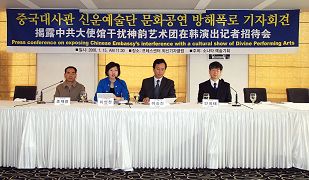 On January 15, 2008, the Korean sponsor held a press conference at Soeul Press Center.

Last year the Divine Performing Arts toured over 30 cities worldwide with over 70 performances, entertaining half a million audience members and winning widespread acclaim from international political leaders. This year the Divine Performing Arts arranged for three shows in Korea, from February 25 to 27, 2008, and signed contracts with Kyung University for the use of Peace Hall in Seoul and KBS Business in Pusan. The two venues terminated the contracts on January 3 and 15, respectively, due to pressure from the Chinese Embassy.

The Chinese Embassy in South Korea also repeatedly attempted to prevent last year performance of the DPA in South Korea. In the end, the show was a great success, although they had to change the site three times.

At the press conference on January 15, the director of Sonata Performing Arts Planning, Li Lianting, said most of the performers in the DPA are overseas Chinese artists and the content of the show was traditional Chinese dance, myths, and legends. The performances embodied high moral standards and universal values, restoring the essence of traditional culture that was destroyed by the CCP in the Cultural Revolution. "This is why the CCP tries everything to stop the performance. Because traditional Chinese culture is in direct opposition to the evil CCP culture, which promotes 'Falsehood-Viciousness-Ferocity,' the CCP is afraid of the performance." He warned that the CCP should stop exporting cultural terrorism to South Korea and destroying traditional Chinese culture.

The CCP pulls the same old tricks, but it's only fooling itself

At the press conference, An Xitai, a representative of The Epoch Times, another organizer of the DPA, pointed out that, although the CCP repeatedly attempted to stop the performances, the DPA went on to enjoy great success, selling out for every performance in South Korea. Based on past experience, An Xitai said the CCP is only fooling itself with these actions. It actually helps to promote the DPA.

During the DPA's tour last year and the Holiday Wonders performances this year, the Chinese Embassy called or wrote letters to senators and government officials in Australia, Canada, the US, and Japan. In the end not only were the dissuading letters exposed worldwide, people's interest in the performance was piqued, and they went to the show and were full of compliments.

“Sharing Some Understandings about Ticket Sales”