New Year Spectacular Audience Member from China: "I am very happy and very proud to see so many Westerners appreciating our precious culture." (Photos)

On January 19, the Divine Performing Arts presented the second Chinese New Year Spectacular show at the Nokia Theater, the largest theater in Los Angeles. Many Chinese audience members commented that the performance was very good and touching, giving young Chinese and westerners a good opportunity to learn about traditional Chinese culture. One lady from Mainland China said that she was very proud. 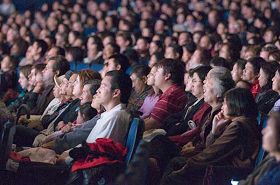 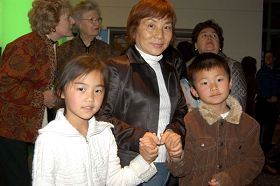 May Fang brought Billy and Coco to the show. Billy said that the show was very good

May Fang was a hotel manager in Wuhan before she came to the US two years ago. "The show was magnificent and the music was excellent. It was very exciting and spiritually uplifting." Fang said, "There were so many westerners in the audience. I am very happy and very proud to see so many Westerners appreciating our precious culture."

"This is my first time to see a show of this kind. I like ancient Chinese traditions and the show inspired me to explore them more," she added.

Regarding the dances depicting Falun Gong practitioners in China, Fang said: "They were very touching. The choreography was great. People in my hometown all know about Falun Gong. And they know Falun Gong is good and the persecution is not right."

As she headed for the exit, she turned back and said to the reporter, "We all have sympathy for Falun Gong practitioners."

“France: "The Persecution of Falun Gong Must End" (Photos)”

“CCP Agents Detain and Threaten Mr. Cao Dong's Wife to Stop Him from Defending Himself”