The head of the China Democracy Party, Xu Wenli, and his wife drove from Rhode Island to watch the NTDTV Chinese New Year Spectacular in Boston on January 12. 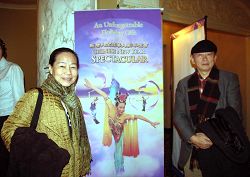 The chair of the China Democracy Party, Xu Wenli, and his wife

Mr. Xu said that the show was outstanding: "It is great that the show exposed the brutal persecution and reflected Falun Gong practitioners' spiritual beliefs through music and dance. Religion is an important component of human lives, but the CCP suppresses religious beliefs. It doesn't allow people the freedom of belief, a basic human right."

Mr. Xu commented on the current situation in China: "The economy is developing, but the moral standard has crashed. In such a situation, Falun Gong practitioners not only improve their moral standard, but also demonstrate the essence of traditional Chinese culture to the world through different art forms. Their contribution to restoring Chinese culture is great."

Mr. Xu continued, "In the 'Cultural Revolution,' the CCP criticized Confucius. But recently, the CCP has tried to build up its 'Colleges of Confucius' all over the world. Actually, in communist China, there is no real, profound culture. The CCP promotes its cheap and shallow culture to the world. China cannot be a great, strong country without a high standard of values." Mr. Xu added, "If the CCP really respected Confucius, then I would not be against building up the 'Colleges of Confucius.' But the CCP doesn't understand Confucius and has ruined traditional Chinese culture, so its behavior is all fake and meaningless."

Mr. Xu said that 90 percent of the audience at the show were Westerners, and he praised the show for its contribution to the promotion of Chinese culture.