The Divine Performing Arts company was warmly welcomed by the audience at the Boston Opera House for their January 10th performance of the Chinese New Year Spectacular. 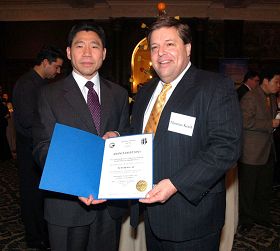 Thomas Koch, the mayor of Quincy, Massachusetts issues a proclamation for the show. 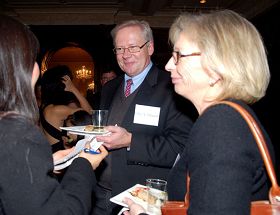 The Swedish consul in Boston comes to the show with her husband. 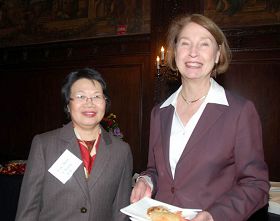 Representatives of the Taipei Culture and Commerce Office and the Massachusetts government come to the show. 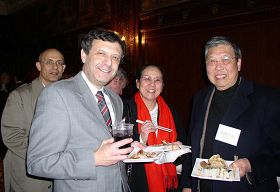 Mr. Cohen, the mayor of Newton, Massachusetts (left), Lin Aidi (middle), the chair of Chinese Art Association and Chen Yulu (right), the director of the art association, come to the show. 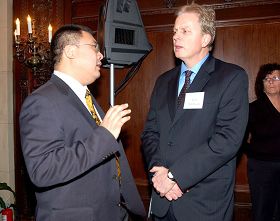 Tom Ashbrook from WBUR on Point is talking to Mr. Dai Dongni, a famous artist.

Several elected officials including Thomas Menino, the mayor of Boston, US Congressman James McGovern, US Congresswoman Niki Tsongas, and the city council of Boston sent congratulatory letters, or issued proclamations honoring the show.

The State Legislature of Massachusetts issued a proclamation to the organizers of the show to praise their contributions to promotion of Chinese culture and positive values.

The mayor of Quincy, Thomas Koch issued the proclamation at the reception before the show.

The Swedish consul in Boston highly praised the show for its beautiful music, dance and costumes.

Many local Chinese artists, including Bei Ling, the chief editor of a local magazine, Chen Yulu, the director of Chinese Art Association, Lin Aidi, the chair of the association, Chu Ling, the chief of a local dancing performing arts troupe, Zhou Chuntang, the former dean of Huafan College, and Wang Shangqin, a local author, came to the show and gave it high marks.

Alex, a doctor from Newton, MA, was amazed by the show. He liked the dances and costumes very much. His favorite dance was "Flowers on the snow mountain," which gave him spiritual encouragement.

Malisiu from Tufts University came to the show with his mother and daughter. He was glad to give his daughter a chance to learn Chinese culture.

Jasmine, a student from New York, speaks fluent Chinese. She said: "I am very happy to see such a good show, especially in my hometown--Boston. I like Chinese culture, which is very profound."

Al, an engineer from Newton, MA, said the show is unique. His favorite program was the drum dance. He said the actors are very professional. He would like to recommend the show to his friends and take them to it this weekend.

“Dallas: "I liked the idea of good being rewarded and evil being punished, and people standing up against unfairness." (Photos)”