(Clearwisdom.net) On January 5, 2008, the Service Center for Quitting the Party in Vancouver and four other Canadian cities held a rally and a parade to support 30 million withdrawals from the Chinese Communist Party (CCP). Many local Falun Gong practitioners attended the activities. 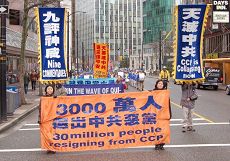 The parade started at noon from the city art center and ended in Chinatown. The Divine Land Marching Band performed in the parade, to the delight of the spectators. In Chinatown, many Chinese accepted flyers and took photos of the parade.

After the parade, the attendees held a rally in Chinatown, and several people gave speeches at the rally. Susan, a representative from the service center, read the New Year announcement by the service center. She called upon Chinese people, especially CCP officials, to read the Nine Commentaries on the Communist Party and quit the party.

Hongyu, a Falun Gong practitioner, told the reporter, "This wicked party is about to collapse, and all of its members will be punished. So, if you don't quit it, you will be in big trouble. I want to save those people who are deceived by the CCP."

Ms. Lu, another practitioner, said, "Many CCP officials know that the party is about to collapse. When I talked to them on the phone, many of them were willing to quit the party. They know very clearly that the CCP is evil." She continued, "Almost every Chinese person knows that the CCP is bad, but some people didn't want to quit the party. Most of them were afraid to do it, and it pains me to think about all the people who have not yet quit."

Hongyu had some difficulties in convincing people to quit the party. One of her relatives was a senior party member, who cursed at her and refused to quit at first. Hongyu didn't give up and told him about all the crimes that the CCP has committed, including harvesting organs from Falun Gong practitioners for sale. He was shocked, and eventually did quit the CCP. Hongyu continued, "Many Chinese want to quit the party, but don't know how. Several people told me on the phone that they were looking for the service center to quit the party. Once I called a CCP official in Beijing. He didn't hesitate at all to quit the party. A few days later when I called him again, he told me that his parents also quit the party."

“About the Early Morning Exercises Program on Minghui Radio (Updated)”