Whereas, New Tang Dynasty Television (NTDTV) is a nonprofit television network dedicated to promoting democratic values and enriching pluralistic societies, preserving and promoting traditional Asian cultures, encouraging cultural exchange, embracing diversity, and enhancing the health and wellbeing of people in the community; and

Whereas, In December 2007, NTDTV will, for the first time, host its cross-cultural Holiday Wonders performance at Atlantic City's Circus Maximus Theater, from December 28th - 30th, gracing the holiday season with the beauty and values of traditional cultures; and

Whereas, NTDTV's shows provide a unique opportunity to enrich our communities through celebrating China's magnificent cultural heritage and fostering understanding between Chinese and Western societies through its breathtaking performance arts; and

Whereas, NTDTV's Holiday Wonders performance will enrich the cultural and economic wellbeing of Atlantic City, as guests will gain insight into Eastern culture, thereby promoting tolerance and understanding among different cultures and races; and

in Atlantic City, New Jersey and ask all citizens to join me in honoring New Tang Dynasty Television and its most noble aspirations.

In testimony whereof, I have hereunto set my hand and caused to be affixed the great seal of the City of Atlantic City, New Jersey, on this 28th day of December 2007. 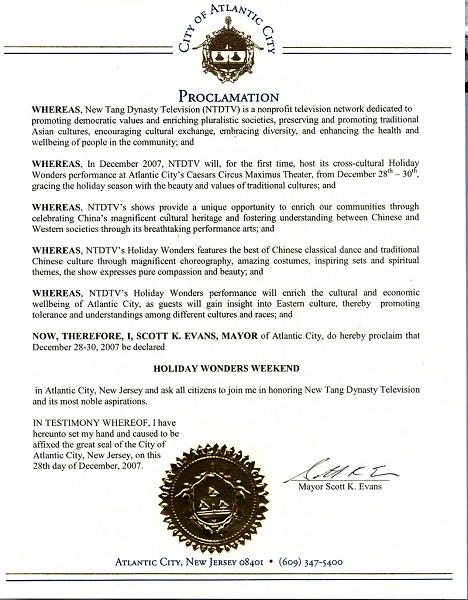