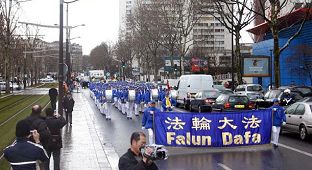 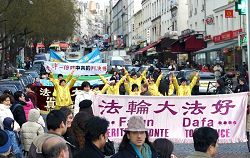 The Divine Land Marching Band performed several pieces including "Falun Dafa Is Good," "Fa Drums and Fa Trumpets," "The Fa Rectifies the Universe," "Blessing," and "Ode to Joy." Some citizens told reporters that they heard the music while they were in their homes, so they came out to see the performance. Spectators said that the music was very powerful and Falun Gong practitioners' group looked wonderful.

“Ms. Liu Huijun Died Due to Persecution in Jilin Province”