(Clearwisdom.net) As the Asia-Pacific Economic Cooperation (APEC) summit approaches, Falun Gong practitioners from Australia held a press conference in front of the office building of the Prime Minister on August 30. They called upon Prime Minister John Howard to ask Hu Jintao, the Chinese president, to stop the eight-year long persecution of Falun Gong and help to rescue imprisoned Falun Gong practitioners. Hu will attend the APEC summit. 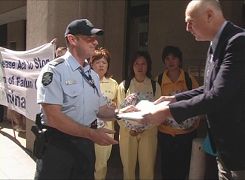 Mr. John Deller, Falun Dafa Association spokesperson, submits the appeal letter to a representative of the Prime Minister of Australia.

Press conference in front of the PM's office

Mr. John Deller, Falun Dafa Association spokesman, Zhang Cuiying and a practitioner whose mother is jailed in Shanghai because of her faith, spoke at the press conference. 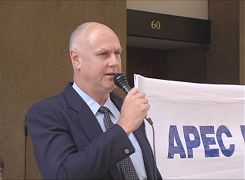 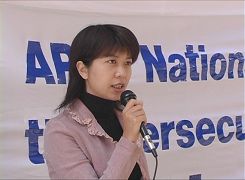 In his speech, Mr. John Deller pointed out that 21 countries who are going to attend APEC,have kept silent on the issue of Falun Gong due to Chinese Communist Party pressure. Mr. Deller called upon all the prime ministers to recognize the evil nature of the CCP and support Western values of human rights.

Zhang Cuiying, an Australian citizen, is an artist and practitioner of Falun Gong. She was arrested and imprisoned in China while visiting friends and family several years ago, and has filed a lawsuit against implicating China's former dictator Jiang Zemin in the persecution she endured. She expressed at the press conference that she was happy to learn that the Australian Government has finally delivered her legal complaint against Jiang Zemin. The complaint was officially delivered to Yan Nan, a staff member at the Chinese Embassy in Canberra. Penelope Richards, senior legal consultant of the Australia Department of Foreign Affairs, confirmed that the Department of Foreign Affairs had finished the delivery process and informed the New South Wales Supreme Court.

Zhang Cuiying said that if they didn't get a response from the accused, they would seek a trial by default. She hopes that the Prime Minister of Australia will bring up the issue of Falun Gong to Hu Jintao during APEC and help to rescue her nephew Chen Zhongsheng, who is jailed in China. Ms. Zhang said: "Chen Zhongsheng, my nephew, was sent to a labor camp in 2000, where he was badly tortured. In April 2006, he was sentenced to two years in a labor camp again."

“Russia: Falun Gong Practitioners Clarify the Truth in the Parks of St. Petersburg During the Summer (Photos)”