(Clearwisdom.net) On August 25 and 26, 2007, practitioners in Holland introduced the grace of Falun Dafa to the Dutch people, and exposed the Chinese communist regime's persecution and organ harvesting from living Falun Dafa practitioners in the central square of Rotterdam using information display boards. 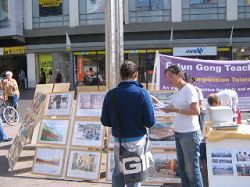 Practitioners set up display boards to expose the persecution in China.

The information boards attracted many pedestrians, who stopped to take a look. Many passersby also accepted flyers. Most of the people were aware of Falun Gong but few understood why Falun Gong was being persecuted by the Chinese communist regime. Practitioners explained in detail the intrinsic evil nature of the Chinese communist regime and the brutal suppression that the Chinese people have endured under its reign for half a century. Because the Chinese Communist Party (CCP) brews falsehoods, hatred and struggles, and could not tolerate the widespread popularity of Falun Gong, which promotes Truthfulness-Compassion-Tolerance, the CCP launched the persecution, forcing Falun Gong practitioners to renounce their beliefs. Upon hearing this, many people said, "It is unimaginable that practicing exercises and holding a belief in Truthfulness-Compassion-Tolerance could have led to such a merciless persecution." Many people were supportive of the 2008 Beijing Olympics boycott, unless the regime stops persecuting Falun Gong.

Accompanied by peaceful music, Falun Gong practitioners demonstrated the five sets of exercises in the square, which attracted a large audience. Many people asked for information about practice sites, and expressed their intention to learn more about Falun Gong. One Dutch lady said she could feel the permeating strength of an energy field that made her feel so comfortable that she stayed at the site for a long time.

After witnessing people's joy in receiving the materials, practitioners enlightened that they need to continue their efforts so that the magnificence of Falun Gong can be planted in more people's hearts.

“Russia: Falun Gong Practitioners Clarify the Truth in the Parks of St. Petersburg During the Summer (Photos)”