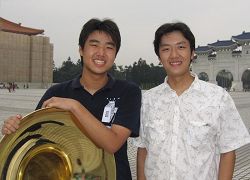 Zhong Yuqi is 23 years old and is tall and full of life. Young people often have a tendency to express frivolous and rebellious behavior, but he does not. He is clean cut and his expression is calm and righteous. Courage, fortitude, and the resoluteness of a man are reflected in the way that he carries himself. His maturity is beyond his actual age.

As a child, Zhong Yuqi would spend time quietly by himself and think: "What is the true purpose for human beings to come to this world? Are our lives simply about obtaining the material necessities of life--food, clothing, shelter and transportation?" He would look up at the sky and feel a sense of hopelessness because he was unable to understand the meaning of life. Why should people become sick and why are there disasters and calamities? Why are children different even though they were born from the same mother? Why do the various people in society have different fates? After all, what was the true meaning of life? 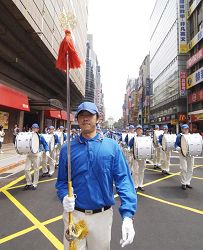 To find the answers to these questions, Yuqi read many books but was still puzzled because he failed to find any answers. While attending senior high school, he decided to choose philosophy as his major at university because he hoped that philosophy might give him wisdom and enlightenment. He passed the entrance exam to the Philosophy Department of Fu Jen Catholic University and he studied diligently. However, after three years had passed, he did not obtain what he had hoped for and was very disappointed.

One day when Yuqi was in his philosophy class, his professor mentioned something about Falun Gong. The professor said that Falun Gong had been spread far and wide in China. In a short 7 years, about 100 million people were practicing the exercises. Yuqi mentioned that this professor seemed to have some supernormal abilities because he could feel the benevolent energy that the professor emitted. The professor said that after contacting several practitioners, he found that Falun Gong was a true cultivation practice, so he suggested that his students purchase a copy of Zhuan Falun if they were interested.

The professor's words were like a beacon of light that illuminated Yuqi's search for truth. One day, when Yuqi was roaming around a bookshop, he saw a row of golden-colored copies of Zhuan Falun. In excitement, he said, "Isn't this what the professor recommended?" and he hurriedly bought a copy. Yuqi found the answers to the questions from his childhood at last, upon reading Zhuan Falun.

Yuqi said, "This book is beyond all the works written by philosophers. Not a single philosopher is able to reveal heavenly principles to people. After reading the book Zhuan Falun, I had a complete and new understanding of the entire universe and of human life. I know the true meaning of life, why people came to this world, and the real purpose of my existence here.

After learning the exercises, great changes happened to Yuqi in terms of health. He felt very light and comfortable even when he was walking or climbing stairs. The arthritis in his knees and shoulders, that he had suffered through for many these years as a result of excessive physical exercise, all disappeared. With the improvement in his physical health, Yuqi also understood the need to upgrade his xinxing.

Yuqi has a 15-year-old brother named Yuhao. In the past, Yuqi treated his younger brother coldly and indifferently and often turned his back on him. Even if the two of them were at home, Yuqi had little to say to his brother. After learning Falun Dafa, Yuqi knew that he needed to change his cold and indifferent attitude toward his family members. Therefore, he began to show concern for his younger brother's life and how he was doing in school. He found that his brother had become rebellious, overly emotional, and impolite while he was in school. Yuqi decided to introduce Falun Gong to him, taught him the exercises, and hoped that they could practice cultivation together. 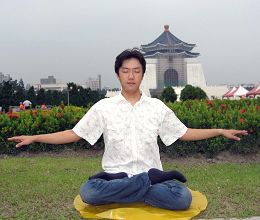 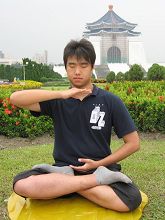 After Yuhao finished reading Zhuan Falun, he found that the book was wonderful. Therefore, he often encouraged himself to progress in accordance with the principles of "Truthfulness, Compassion and Forbearance." Yuhao's teachers and classmates alike were very much surprised to see the changes in him. In the past, he was truant, fought with other students, swore, and did not turn in his homework. For the most part, he was a headache for his teachers. However, since he began practicing Falun Gong, Yuhao has completely changed for the better. He is no longer his old self any more as is he is now polite, gentle, and modest.

With the improvement in his xinxing, Yuhao's physical health has also improved. The pain in his ankles and knees has all disappeared. When he was in his final year of junior high school, he had to prepare for the entrance examination to enter senior high school. However, no matter how busy he was, he would read one or two lectures of Zhuan Falun a day and do the five sets of exercises.

Yuhao was very diligent in his cultivation practice and as a result, he could get twice the results with only half the effort in his study. Even if he stayed up late and did not get enough sleep because of his studies, he would still be full of vigor when he woke up the following day. His classmates also looked at him differently because of this.

Now Yuhao has been admitted to the senior high school that he had wished to attend. He feels that he is very blessed to have the opportunity to learn Falun Gong and wishes to tell his friends the preciousness of Falun Gong. What he wishes to do most is to set up a Falun Gong Association in his school. He would like teachers and students to have an opportunity to understand Falun Gong because it has made it possible for 100 million people around the world to become healthy. 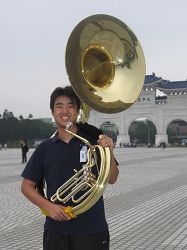 In their spare time, Yuhao and Yuqi have joined the Divine Land Marching Band. Both of them are tall and have good posture so one of them takes the role of the conductor while the other one plays the sousaphone. They have realized that through music, they can show the world's people the purity, righteousness, and beauty of Falun Dafa.

Yuqi said, "My understanding is that the Divine Land Marching Band is of great significance. Many of those who were deceived by the lies fabricated by the Chinese Communist Party and those who have had negative views about Falun Dafa have changed their attitude after hearing the music we played. There are many Chinese people in Hong Kong and I can see in their eyes that they have a longing to hear our music. I was very much moved by the expressions in their eyes. "

Yuhao said, "At the very beginning, my reason for choosing the sousaphone was that it was really powerful and it looked quite impressive when one plays it. Later, I enlightened to the understanding that playing an instrument is to validate the Fa. It was difficult when we first joined the band in parade, for various reasons, with the worst aspect being the scorching summer heat. However, when I realized that it would help people to have a correct understanding of Falun Gong, I understood that it is completely worth it."

Since the brothers cultivate Truthfulness, they understand how precious it is to return to one's origin. They have changed from being indifferent, aloof, and selfish to being selfless through putting others before themselves. Since they cultivate Compassion, they feel a sense of broadmindedness. Since they cultivate Forbearance, they learned to forgive others and they are now bravely walking their life's path.

During their cultivation of "Truthfulness, Compassion and Forbearance," Yuqi and Yuhao are gradually getting rid of the dark and dense haze from their hearts and minds. They are walking diligently on the path of returning to their origin and true self. Not only are the brothers benefiting themselves, but also other people, and society as well.

“The Death of Su Qian”