Korea: Many People Quit the CCP at Mid-Autumn Festival Activity in Seoul (Photo)

A Chinese and Chinese-Korean Art Entertainment Celebration was held as part of the activities of the Mid-Autumn Festival in Anyang River Citizen's Park in Seoul on September 26, 2007. People were fascinated by a unique scene along the one kilometer road from the subway exit to the entrance to the park. To the music of the Divine Land Marching Band, two to three hundred volunteers from the Global Service Center to Quit the CCP and Falun Gong practitioners told people the true story about Falun Gong and the Chinese Communist Party (CCP) and asked them if they would like to quit the CCP. More than than a thousand Chinese people had their eyes opened. When they decided to quit the CCP, the Communist Youth League and the Young Pioneers, they were very happy. 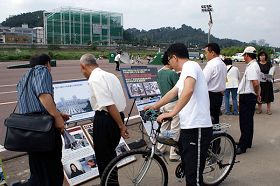 The Mid-Autumn Festival is the grandest holiday in Korea. The city of Seoul holds an art entertainment celebration during the festival for Chinese people every year. More than fifty thousand people were attracted to the celebration this year. Volunteers of the Global Service Center to Quit the CCP walked into the crowd with pens and paper in hands, clarified the truth about Falun Gong and asked them if they would like to quit the CCP and its related organizations.

Upon hearing more than 26 million people had quit the CCP, an elderly Chinese Korean gentleman said in excitement, "Let the CCP collapse soon! My family was categorized as capitalists years ago. Our property was stolen. We lost our rights to speak for our life time and almost died..."

Every volunteer's work paid off. They all shared the same feeling. When people were able to learn the truth, most of them would quit, and they were happy after quitting the CCP. Every Chinese person loves China. They felt they made a contribution to the bright future of Chinese society. It was true patriotism.