Invited by the Epoch Times in South America, Mr. David Matas, a renowned international human rights lawyer and one of the authors of the Report into Allegations of Organ Harvesting of Falun Gong Practitioners in China, made a trip in August 2007 to tour Central and South America, including Peru, Argentina, Uruguay, and Mexico. He spoke on the topic of concern; met with political leaders, representatives of human rights organizations, people in law circles, doctors, religious groups, and students; and exposed the Chinese Communist Party (CCP) atrocities. 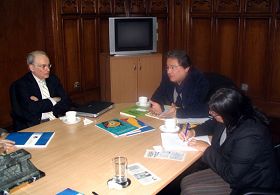 Mr. David Matas was interviewed by the media

Mr. Matas said that the histories of many countries in Central and South America included periods of human rights violations, and that international condemnation then helped end some of these these reigns of persecution. Thus everyone knows the importance of international support.

He said that, on this trip, he talked about this issue with many people. Though they were not direct victims, they said that they had clear memories of the human rights violations in their countries. Having experienced the benefit of international support, the Central and South American people should therefore lend their voices to support the people in China who are being persecuted today.